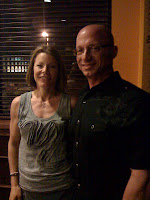 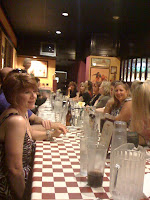 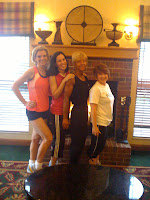 I flew into Chicago on Friday morning, then driving to Rockford. As I entered my room laden with my weekend bags I sent a text to Angie letting her know I had made it to the hotel.

Now, I have never met Angie person to person. I know Angie as "Angie from IL" on the LL website. 5 years ago Angie and I took part in Coach Dave Greenwaldt's Bootcamp 1 (Bootcamp 13 just wrapped up). We have been active in LL since and keep in touch via the boards. A few months ago Angie emailed me to see if I would coach her to run her second half marathon. Of course I would! She finished the half in horrible conditions, but in fine form, two weeks ago.

As soon as I sent my text my phone rang. It was Angie, stating she would be right over. I was stunned. I quickly put my bag down and she was at my door. After hugs and hellos she took my hand and led me down the hallway to another room. A room where Liz from NY, Robin from IL and Mary from IL were. Liz has been training for figure and Mary for bodybuilding. They look amazing and both have lost over 100 pounds. Yes, 100 pounds with Leanness Lifestyle. These four women welcomed me like I was an old best friend. We sat and laughed and talked for 2.5 hours until we realized we needed to eat and I needed to unpack before our 700 LL get together. Before I went to my room Angie presented a gift to me. A beautiful silver/black onyx bracelet with a heart charm hanging from it that says Run On on one side and Coach Julie on the other. It is beautiful. Like I said, incredible.


22 of us met at the LL 'meet and greet'. Coach Dave, Coach Tom and a friend, Chad Coy-personal trainer from Kokomo IN were also in attendance. Dave gave a fabulous presentation, we introduced ourselves to one another and chit chatted. It was so wonderful to meet everyone in person. We learned that Chad, Dave and Tom would be training us in the morning. I couldn't wait.

Saturday morning arrived and I went out for an 8 mile run. It was warm and sunny at 5 AM. After a quick trip to Starbucks it was about ready for the workout. I had Doreen from IL ride with me to the gym, roughly 20 miles or so away. Doreen and I were partners for a few assignments in Bootcamp 1 or 2. I don't recall which. We followed Sylvia from WI to the gym (and everywhere else in IL!) thanks Sylvia!You never led us astray!

The workout was intense. Chad led us through a warm up that felt like a workout. We were at an Anytime Fitness and there were 22 of us. We managed to have enough room, even with a few gym regulars doing their thing. After the warm up Chad told us we would be doing a circuit training type of workout..we'd partner up with another and go through 14 stations..for 90 seconds each, then a recovery, moving onto the next station, x 3 (or 4?). As people were pairing off I just kind of stood there, looking around, thinking I felt like I was in 6th grade and was waiting for someone to pick me for dodge ball and alas, no one would ever pick me. I was not the athletic one! I heard Liz from NY ask Dave 'who should I partner with' I thought I heard him say 'Julie' but I thought I was probably just wishful thinking. Sure enough Liz came up and asked me if I'd be her partner. We were perfect for one another. Man, we worked out butts off. We did rows, bouncing a heavy ball, push ups on a ball, shoulder rows, lunges, squats...by the second round through I was thinking that I probably shouldn't have run first! My quads were on fire. Sweat was pouring off of my body. Coach Tom asked if I was OK. Yeah, I'm OK. I was totally loving it. Pushing through the exhaustion, seeing how much I could handle. How many push ups could I do in 90 seconds, how many ball ham curl things, how much weight on the chest pulls? Amazing. I and Liz were getting tired on the last round. She didn't slow down on the lunges AT ALL. I did. Dave came over and told us to step it up a notch. Faster arms, faster lunges, holy crap I about died. Really. I had a few hacking attacks. I managed to take Troy's cold with me. I'm still hacking like a cigarette smoker. I hung in there. Finished the hour + workout. Chad then led us through a core/ab blaster. My abs still hurt. We finished with the plank. Longest person to hold would win a free dinner. I held it for 2 minutes and dropped. I thought that was long! Christy from TX and Holly from CO held for FIVE minutes! Chad called a tie. 5 minutes! Wow.

After the workout we headed back to Rockford for shower/lunch before the pre judging at 1230. A shower never felt so good!

Prejudging was amazing. I've never see it before. I was totally immersed. Watching the poses, the definition, the suits, the color. So much to learn.

After prejudging I went back to my room and read "I Am Ozzy" for a while. I though I may take a nap but I was too keyed up. I went for a short run. The show began at 7. We had fantastic seats. We were right in back of the sponsors. It was incredible. A huge show, 156 competitors, figure and bodybuilding. Again, amazing. I picked the woman winner. She had beautiful full muscles, but could have been a bit darker, had great poses and looked amazing. She was from the masters class and took overall. Mary looked incredible and her routine was so beautiful, graceful, awesome. Wow.

After the show it was off for a late dinner, lots of talk and fun. Dave had me stand at the end of the table and do a front double bicep pose. I turned beet red and became hot and sweaty. I did get the pose off and it must have been OK as this led to much discussion..which is just what I was looking for. We visited until after midnight. I was exhausted. Unless I'm running a 100, I am never up at midnight!

I slept until 5 and went for a quick run before breakfast. Our last hurrah before everyone went their separate ways. An amazing discussion at breakfast about my goals for the future. These people. Inspiring. Motivating. Personal Growth. You people are incredible and I am a better person for meeting you all. Thank you. Thank you. Thank you.
Posted by Julie B at 6:03 PM