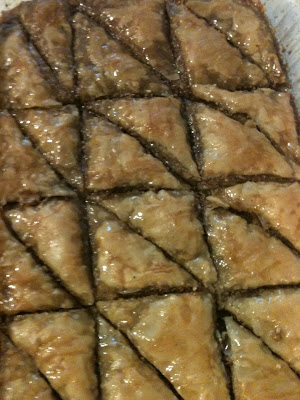 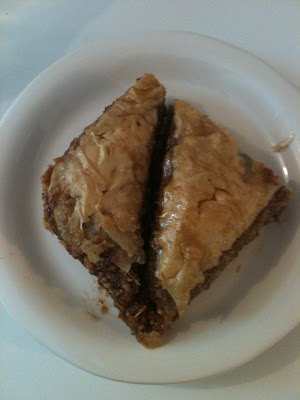 Erica of Erica’s Edibles was our host for the Daring Baker’s June challenge. Erica challenged us to be truly DARING by making homemade phyllo dough and then to use that homemade dough to make Baklava.

Two challenges in one! Not only creating the lovely Baklava but also creating the phyllo dough from which to make the Baklava.

I, honestly, had not even made Baklava before so I was really looking forward to this one.

It was fabulous and not so difficult, either. My phyllo dough wanted to stick to my counter top so I began to roll it out on a pie guide thing. It's a soft plastic form which really works well for pie crusts and proved to work very well for rolling out phyllo, too.

Neither Troy nor Steve had ever tasted Baklava before. I explained it to them but all they heard was 'nut pie'. I guess it was a good enough description.

They both loved the Baklava. Steve liked the spices, Troy liked the honey. What a great combination.

I didn't have any walnuts on hand so used pistachio, almonds and pecans. I don't have a food processor-really-the horror-so used my super coffee bean grinder instead. Worked like a charm.

The most shocking thing to me while putting the Baklava together was the large amount of liquid (honey,water, sugar, spices) to pour onto the already baked Baklava. Sure enough, the Baklava soaked in all of the honey. The Baklava became sweeter with better texture on the 2nd day. After that, it was all gone :)

If you'd like to create your own Baklava here is a link.
Posted by Julie B at 3:17 PM

That looks so much better than mine! For the UMTR awardsfest in 2009, I made baklava - and had to throw it out, as the seeds were rancid!

Great job on the challenge, Julie! Your baklava looks delicious! I read your story on your sidebar. Good for you for getting on track and passing it on. I too am a runner, not ultras, but a few marathons with a half marathon just last weekend. :)

I just found your blog and wanted to say hello :) it is really cool blog

Great job, Julie - Aren't triathlons a blast?? You sound like you had an amazing time!! Lovin it!