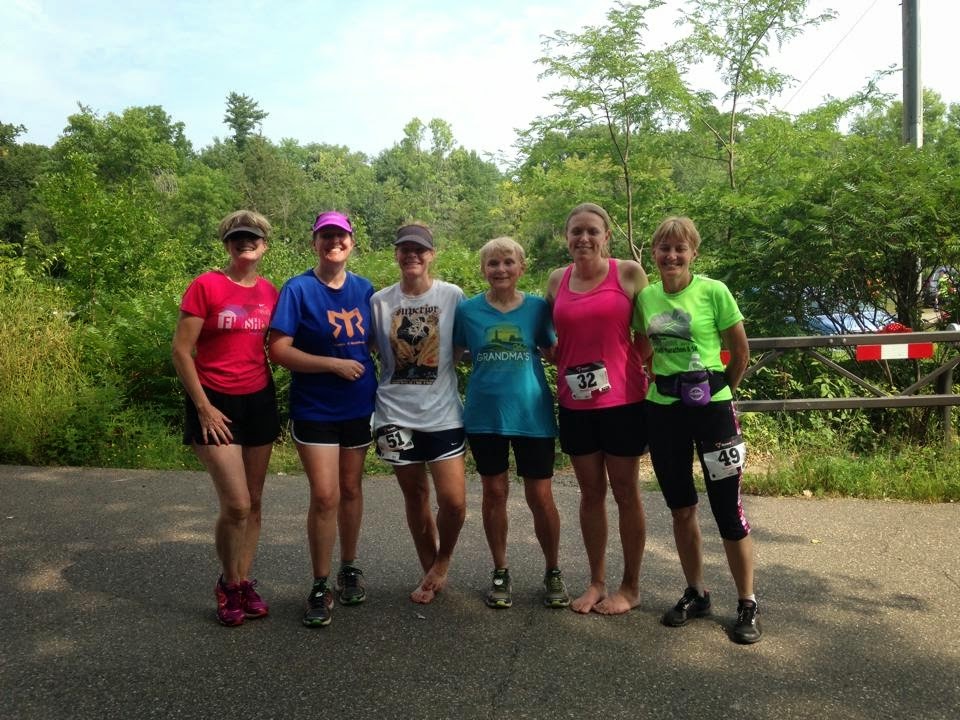 Club Run held their first annual Grizzle Grind races yesterday. They offered a '10' mile and a 5K. I like their Facebook page so read about their race a few weeks ago. I thought it would be the perfect time to introduce some of my 'mostly road running' friends to trail running.We all signed up for the 10 mile option.

Grizzle Grind was held at Elm Creek Park in Maple Grove, only a half an hour from home. Angela, Deb and I  met at Heidi's for the ride over. We met Jean and Jody at the race start and had a good 45 minutes to mill around and use the facilities.

Ryan and Jordan were sweeps, it was fun to see some ultra buddies there. On the way to the start Tim Roe said hello and it took me a while to realize where I knew Tim from. It finally dawned on me, Tim developed Tuscobia  a few years back when I ran the race.

As we were waiting for the start two women popped out of the trail, onto the area where we were waiting.  One woman stated with disdain "road runners gonna use our trail" with disgusted looks on their faces. You know I just couldn't help myself. I told one of the women that she was a poor role model for trail running. She sneered. Whatev...

The race was very well organized. All aid stations were fully stocked with gels, water and Gatorade. The course was well marked and the volunteers were full of joy!

The course was held on a mountain biking path. It was very smooth-a few rocks and roots here and there-but mostly worn very smooth. Manymanymanymany hills. Up down and up down over and over again. I ran 24 miles on Saturday and yesterday was a scheduled 14 mile recovery run. It didn't feel much like recovery!

I was wearing the Superior 50K shirt from a few years back and fell into pace with another runner, wearing the same shirt. Bruce and I ran a few miles together, it was fun meeting and running with someone new.  After about 5 miles into the race I was warmed up and able to run faster..I didn't see Bruce again.

I popped out of the woods at 2:11, 12 miles on the nose. In comparing mileage with some of the other runners I realized I ran an extra half mile as I ran to the final aid station which was optional. I chose to fill up my bottle for the final two miles.

Next Up: RAGNAR on Friday with Heidi, Jean, Jody and Angela from above photo.


On July 30th I celebrated my one year anniversary on no longer drinking Diet Coke! YES!