Happy 12th Birthday to my Topaz! 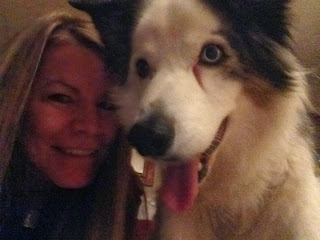 The Donut Day 25K is a fun run put on by Jordan Hanlon in Minneapolis. It’s free! Runners run from bakery to bakery and eat donuts…ending at a donut shop.  I  really wasn't sure what to expect for the Donut Run, just that it sounded like fun!

I knew that there was a 5, 10 and 25K mile version. My longest run was 5 miles coming in. I ran a 5 in the AM and a 3 in the PM, I suppose 8 miles technically.  I knew that we were running through the Minneapolis area and stopping at local bakeries. Fun!!

The weather was forecast to be cold. -20F and -35F Wind Chill. I wasn't worried about that. Layers of good running clothing is all that is necessary.

We were starting at 800 at Lake Nokomis. I stopped for gas and had to wait for a train, before I knew it I was running late. I approached Lake Nokomis at 755 so opted to park in the pay lot so I didn't have to scurry around looking for parking.

I wasn't sure if I'd know anyone running. I walked slowly to Jordan giving the directions to the group  and was excited to see Maria and Doug nearby. Maria was running the 25K and Doug the 5 mile. I still wasn't sure what I was going to run. When Maria asked I told her 10 for sure, hopefully 25K, but still not sure. I'd see how the ankle felt.

Before I knew it we were moving. There were probably about 30 of us  in total. Last year there were 150 but the cold temps must have been cause for bail out.  I don't know why. Seriously. It was just a joyful time.

I ran by myself from Lake Nokomis to A Bakers Wife-at 4200 and 28th Ave South. This was only a few miles so I didn't go in for water .. or a donut .. I had to pee. Jordan suggested I go next door to the bike shop. It was very nice to use their warm bathroom!

At this point, so lucky for me, John Taylor and Maria were standing outside of the bakery, deciding not to enter, either. I was able to hook up with them and stayed with them the whole run. SO blessed!! SO excited to run with my two buddies again.

Maria knows the area well-she knew right where we were going to go so she just led us along. Our next stop was Glam Doll Donuts at 2605 Nicollet. We went Right instead of Left on Nicollet-I had a map in my pocket so a quick glance showed us our error. We trotted down to Glam Doll-I could smell the fragrance of hot oil and sugar as we approached! Glam Doll was a hoot. Pretty sparkly pink Christmas tree in the corner, girls all glammed out, a huge array of donuts, warm bathrooms, water for the runners. I downed a gel and a bottle of water here and noticed that

The end of my pony tail was a rats nest.   As I was trying to pull the knots out a kind woman, Lisa was her name, took out my pony tail holder and braided my hair. Yay!  I wouldn’t have to worry about it all breaking off. 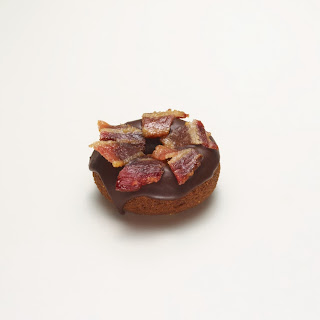 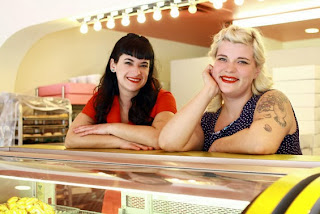 Maria found a bacon covered donut here. I think they may be the new rage. We seemed to spot bacon pastries at each stop.

We began to catch a chill so headed out for our next stop: Angel Food Bakery. The route was so much fun on the way. We were now downtown Minneapolis, running past my old working grounds. I worked in the Piper Jaffrey building on Marquette, 11 years ago. We ran right past it. Ran past the Metrodome, the Guthrie, good times.

By now the wind was blowing in our faces. The air temperature was -11F and the wind chill -25F. I kept warm. I was wearing a pair of heavy tights, the Skirt Sports pants with skirt, a tank top and two long sleeved tops, my winter running jacket. Two pair of gloves, a pair of wind mitts, a neck gaitor and heavy fleece hat. There were points where I took off my mitts but for the most part I dressed perfectly. I wasn't cold a bit.

At Angel they had a tank of water with lemons for us. It was fabulous and so wonderful that I didn't have to carry around a bottle of water that would end up freezing anyway. Not to mention warm bathrooms with hot running water! 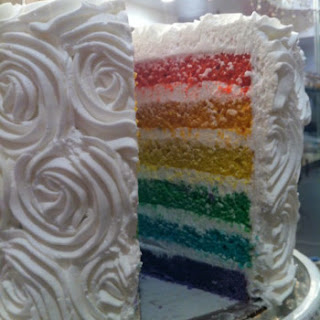 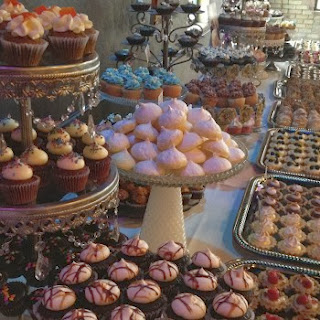 I was blown away by the cake above!  Maria had a cronut here. A cross between a crossiant and a donut. It looked pretty cool.  I sucked down another gel and some more water.

We left Angel and headed for our final leg to Mel O Glaze. By now I had decided that I was going to run the full 25K. My ankle was so awesome and I was so happy that I couldn't stop smiling. I ran at the mouth and caught up on everything with Maria. We listened to John stories-I have mentioned before that John Taylor has the most interesting things happen to him while racing. I can listen to him for a very long time!

As we were running along the Parkway we heard cheering and saw an aid station set up! Here Club Run had set up a wonderful aid station with HOT Caribou Coffee!  What a treat. We stood around, took pictures, laughed and had a blast..while sucking back two cups of coffee. 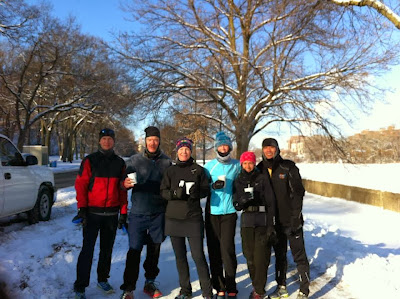 ?, John, Me, Lisa, Maria and Dan We ventured on until we hit Mel O Glaze, which was only .5 miles from our finish at Lake Nokomis. A quick check in with friends Misty and Thad, a glance at the huge donuts and we were on our way to the end.

As the three of us finished up the run I explained to Maria and John how wonderful it was to be out running again. I felt empowered, joyful, strong. Just how I want to feel.

It has been at least a year since I've sat down at my home iMac to compose an entry for my Blog. I just hadn't felt the need.  A quick update from my iPhone is about all I've been doing recently-if even that. For some reason today that changed. Maybe it is because I'm turning 49 this month. Maybe it is because Tyler turned 22 today. Maybe it is because this month marks 9 years since I began this blog. Wow. Time has flown. Heck, Topaz will be 12 on Thursday! December is a big month around here.

I look back at this year and all I can say say is shit, it has been tough as hell. I have never said those words about a prior year before. I have always said how wonderful the past year was, I list my goals met, my goals for the future, how marvelous the year was.  Not this time. It just wasn't. Not that I expect every year to be unicorns and rainbows. I have always felt blessed and thankful for the low stress, non harried life I live. That life wasn't so this year. This puts me in a very uncomfortable place-once that I am not accustomed to nor familiar with.

-I suppose it begins with menopause. I went directly into menopause three years ago next month when I had a total radical hysterectomy for the prevention of ovarian cancer which runs rampant in my family. (I will be putting a blog post together all about running and hysterectomy. It is one of the  most hit topics on my blog..and I don't have many of those posts here). Everything is different. My body, my hormones, my moods, me. I am not using hormone therapy. I'm hot flashing not stop, I'm riding waves of emotion, sometimes high anxiety and hysteria. If I had been able to ease into menopause without surgery my symptoms wouldn't be as difficult to manage. Hey, it beats cancer, I keep telling myself.  Yes, yes it does!

-Of course the death of my mother made for a horrifying year. She passed last November and it has really been a struggle for me. Duh. The pain is just as raw now as it was last year at this time. Last year at this time it may have been a bit easier..as I was just numb, not able to feel it as   I am now.

-Big Life Changes. Tyler moved out three years ago and Troy will be heading off to the college in August. I'm beyond excited and proud of him..but you know, big changes.

-Fracturing my ankle in July really threw me for a loop. I didn't let the damn thing heal and foolishly began Superior 100-I can say foolishly,  since I then broke the fractured ankle during this race. Had I not, and finished, I wouldn't say it was foolish.

The recovery has been difficult. Running as much as I do, with as many miles and races I have put in over the past 10 years of ultrarunning-I knew it was bound to happen. I always wondered what would happen to me physically - emotionally -  mentally - if I were injured. I now know.  Here this is 'only' a broken ankle..what if something happened where I could never run again? I would deal the best I could.

With an MD and  orthopedic surgeons telling me I wouldn't run again I had to think about that scenario.

I wondered if I'd pick up my old friend alcohol again. I didn't think so..but with the depression I was feeling, who knows? Thankfully, I did not.

But I didn't drink. I held it together the best I could. I cried. I screamed while walking through the woods. I held Topaz tight. I pretend everything is OK. It's the best I can do.

Addiction. I replaced alcohol and tobacco with running. I then found while I wasn't running I was consuming copious amounts of sugar. Another addiction. Not that I didn't know this would happen, It's always just under the surface.

No running, depression, menopause + eating sugar = weight gain.  Sure, I've been lifting and CrossFit, it isn't the same..physically or emotionally.

A few weeks ago I ran my first 5 mile run. I cried almost the whole way. I was so thrilled. You know, it isn't 'just' about running. Running encompasses so much for me.  It is so much more, but running started it. Running helped me to become the person who I wanted to be. The person who I didn't think I could become.  Running has allowed me to feel alive. Running has kept me sober for 17 years. 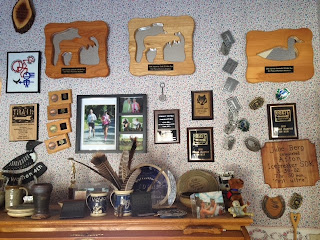 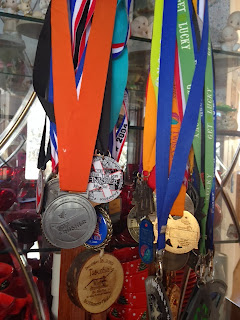 Today Topaz and I went out for an 8 mile snowshoe run at Lake Maria. I was -11F, -25 WC. I smiled the whole way. I thought about next year. I thought about what it will be. I celebrated that I have made it through this year. The best that I can.

This sat in my draft for a day. Hence the mismatched title :D