Chippewa 50K OH WHAT FUN IT IS 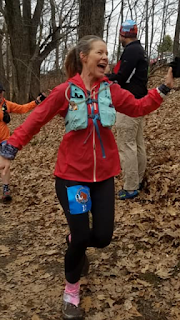 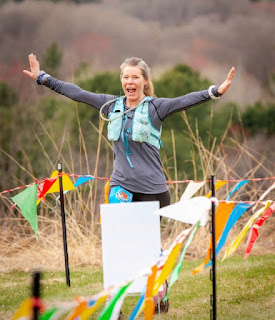 I’ve had some bad luck making it to race start lines this year. I had entered Three Days of Syllamo in Arkansas for mid March. I had planned a fun vacation with fellow runners, staying in a beautiful home on the river and running dry trail for a few days. That didn’t pan out. A week before the race I came down with what I thought was a cold but when I spiked a temperature I realized it was more than a cold and thought it was probably bronchitis or something like that. A doctor appointment confirmed double pneumonia.  What a bummer. I was out of that fun.

I recovered quickly and then was going to run Zumbro 50 miler the first week of April. Well, Zumbro being Zumbro…we were hit with a blizzard and the race was called off. I was actually relieved that John cancelled the race so that I didn’t have to drive down there-I would have and it would have been dangerous.

With Chippewa 50K around the corner I wondered what could possibly stop me from lining up. I was hoping to break the bad luck.  I kept reading on social media that snow and rain was forecast for race day but I didn’t pay much attention. I’ve been running in snow and ice since November and really couldn’t care less what the weather was, along as it wasn’t another blizzard.

Last week as I ran 4 hours at Afton I noticed a lump I’ve had on my back for a few years began to become irritated, larger, and maybe infected. I tried hot packs, tried applying pressure and couldn’t get anything to release from it. I made another appointment to the friendly doc. I didn’t realize she’d removd it and stitch me up at the same visit. She told me it was a very deep sebaceous cyst, about 3mm deep and round. 12 stitches later I was on my way home.

I forgot about those stitches until I put on my pack Saturday morning. The pack landed right on top. Ouch. I tightened down my pack and hoped the stitches wouldn’t interfere. They didn’t!

Race day was dry and cool, the trails were beautifully set up, a bit of softness and only a few sections of mud. It was a glorious day!

Last year I finished the race in 806 so I was hoping I could finish with a faster time. Last year this was my first race back after 18 months off so a faster time shouldn’t be difficult. I’m also 38 pounds lighter. Big changes.  I kind of thought 3:30 out and 3:30 back would be a good plan. 7 hours total would be magic.

I started the race  with light tights, long sleeved top and a light windbreaker; gloves and ear warmers. It was 33F. I wore that jacket all of the way to the turn around and was comfortable all day.

The lakes were full, some flowing out of their shorelines up onto the path. It was so much fun to run around them, skirting the water, running along the soft moss.

The course is an out and back, it’s so much fun to see all of the runners coming back as I am going out. It felt good to be running at a faster pace this year, a few minutes per mile made a big difference.  I came into the turn around at 325, very happy with my pace. I wasn’t running too fast, I was very comfortable, running well within my ability. Greg filled my pack, I emptied my trash and cruised back to the start, enjoying every step. Truly enjoying every step.

While running these events I am always thinking about, wondering about, trying to put into words what I love so much about running. It sometimes evades me. I enjoy spending time along in the woods, I enjoy focusing on only me, only placing one foot in front of the other. I enjoy endurance. I feel like I can conquer so much through endurance. I can squelch feelings of depression and anxiety, of self imposed restrictions. I am open, feeling, not trying to cover feelings. I let them flow and feel. I feel so much joy. I feel so much joy that I feel my heart flutter...and why? Why so much joy? I don't know, but I fell it..wholly.

I drank 60 ounces of tailwind and 3 gels on the way out. On the way back I drank 40 ounces of water and 4 gels, 2 cups of coke. I felt well fueled with plenty of strength and endurance. I didn’t have any low points, I was reveling in the beautiful woods.

50K is such a great distance. I’m comfortable with it. No pain, just fun. They don’t take all day long to run, the recovery is pretty fast, if something goes wrong it can normally be turned around.

I came into the finish at 657, elated!  What a blast, it truly was. Spending the day with friends, swapping race stories at the finish, watching others finish, all of the things I love to do. I feel such gratitude, like I am really blessed, to be able to do this again. I love it.

Coming up is Superior 50K, then Black Hills 50Miler. I haven’t run  a 50M since Voyager 2016, after becoming injured there I wasn’t able to run again until 18 months later. I’ll be very conscientious as I run Black Hills and  be sure not to cross that line from joy to injury!! I can do it .