I have  had a few good weeks of running and boy does it feel good to string them together.  It feels good to have running goals to work toward again.   I stepped back for a while when I needed to and now it feels fantastic stepping back into the run.

I ran 20 today and 16 yesterday. It has been a long time since I've run back to back longer runs and have felt so great.

Yesterday I drove to Lebanon Hills to meet Maria for 16 miles. As we were making our way out of the parking lot, we saw Travis was putting on his shoes near his truck.  Hi Travis!  He told me he reads my blog. I haven't updated it in a long time..so thought I would.

We waited for Travis to get ready and headed out on the trail. It was a beautiful morning. I have been out to Lebanon a few times now this year but just never pay attention to the trail. I allow Maria to lead the way. I need to pay attention. I for sure will  .. next time!

As we were closing out 10 with Travis I saw something up ahead on the road to the lot. A little dead something. We ran past and could smell the rot. Maria plugged her nose and went back to see what it was. A poor baby raccoon!  It looked like he was flooded right out of his nest. As we ran on we really smelled a stench. I suppose it was the rest of the brood? Sad.

We ran Travis back into the lot, Maria and I headed out for another 3.5 before she had put in her mileage goal. After a nice visit in the lot I went on my own to run another 2.5 around Jensen Lake. I made sure the lake was always to my left and didn't get lost once :)

16 miles and I was feeling very very good. It was a beautiful morning. Thanks Maria and Travis!

Today I had 20 on the schedule. I felt well recovered this morning, no aches or pains. Now, last week I was real achy. I felt tired, my feet and legs ached. I had 600 miles on the latest pair of Inov-8s so this is probably partly why I felt so achy. I also haven't been real careful with recovery. I've been winging my shorter runs for a good year and had been winging the longer ones recently as well.  It is time I snap out of it and get serious.

I have been watching the Hokas for a few years now. Some friends who are amazing at the 100 mile distance swear by these shoes. They state you can run right over rocks and roots. Superior 100, hello! I decided to give them a try and bit the bullet last week. I bought a pair of Hoka Stinson EVO.

Wow!  What a difference. Sure, they are brand spanking new so that is one reason they feel so fabulous. I've only worn them this week and can't believe my feet and knees are not tired or achy at all. AT ALL.  In addition to the new shoes I was diligent this week about nutrition. Gel every 3 miles, Ultragen every post run, stretching, soaking in ice, drinking plenty of water, electrolytes, the whole nine yards.

I went out and ran 20 on the trail and didn't feel fatigued until mile 16. Amazing. Really!  I couldn't believe it. I am feeling super excited. It's been a while. The mileage this week didn't wipe me out. After the 20  I cleaned house, buzzed to REI, grocery shopped..welcome back Running Julie!

I find myself very excited about Voyageur Marathon, Voyageur 50 and Superior Sawtooth 100.

A few days ago a friend asked on FaceBook 'why do you run ultras?' I'm asked this often and the reason changes for me, depending where I am in life. The reason I ultra now has changed from when I first began. It depends on the day that I am asked.  I received many messages about my reply and then questions about the journey I have taken. My response on FB was:

I find that I yearn for goals with solid deadlines such as a race date or a mileage goal. I like to be able to measure my progress in more than one way. Pace, distance, measure of health. The outcome must be challenging with self-discipline, nutrition and scheduling a priority.

My goal must stir a passion inside of me,  engulf me fully, 24 hours a day be on my mind. It must allow me to feel uncomfortable, to step from my comfort zone so that I will experience personal growth. It must include physical activity but provide an emotional challenge as well. It must bring me great joy and allow me to be in the moment.

That is what ultrarunning is for me, at the moment. I just really really am loving it.

It began with a single idea:  to lose weight and to stay sober.  It has morphed from there, as have I.

Well, I did it again. Went into a race completely under-trained. Oh well...I had a blast!

I hadn't run a race on the Superior Hiking Trail for a few years! We camped it the last few years so I have run upon its gnarly beauty-ness but haven't entered anything.

After feeling terrible at Louisville I put Superior away, I wasn't going to do it. I just wasn't feeling it. Waaa waaa waaa  cry about it, right. Well, then lo and behold, my friend Misty set her wedding day celebration right after the race, lakeside. I certainly wasn't going to miss her wedding and I couldn't go up to Lusten for the wedding without running the race...so I decided I'd run..two weeks out.

I quickly booked a room at Caribou..I couldn't believe that I was able to get a room on such short notice. Normally it sells out quickly. I love staying at Caribou for the 50K. We start and finish on their property.

The matter of training..guess I better run a quick 20..that's just what I did. Egads. With snow all over the trails I ran road-flat road. Whatev...

I was excited about the race. I hadn't run the race since John Storkamp took over as RD. It's been a while.

Checking in on Friday I visited with the gang, caught up on all the racing news. So much fun.

I just totally enjoyed myself the whole way. I took it nice and easy, took photos, visited when i was around others, reflected on memories as I came upon landscape which jogged my memory of past time that I've spent upon the trail. It was fabulous!

I loved that the race course now takes us up up up Carlton Peak to the very top-before turning around back to the start. In the past we would turn  around before we reached the peak. It was foggy, thick and wet. It was so awesome. Just awesome.

Such a blast..the water was high, the river crashing upon the banks, an incredible trail and adventure.

After I finished I soaked in the hot tub to get the chill out. Legs felt great, no problems. No tummy distress. I stuck to gels and water, perfect.

This race got the mojo flowing again. I don't know why I let a bad run in KY change my plans but hey, it happens. I feel like training again, I feel like making progress, I feel like pushing again. 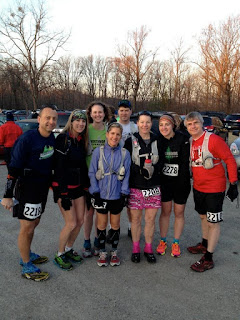 Since my mother's passing in November I notice every once in a while that I am in a pretty dark place. Not all of the time, but there are moments that I notice this.

During one of these dark moments I reached out to my friend, Maria, to talk of winter races. As I posted previously, she was headed to Kentucky for Louisville Lovin' The Hills 50K and invited me to tag along. I was so grateful to have something to train for, to do something that I love, to lift myself from this depression..I began to cry and then responded with a big YES.

After dropping Troy off at school on Thursday I headed for Apple Valley. Maria and I would pick up Misty and Joel and then head off for Kentucky. Road Trip!

The weather was horrible. Maria drove all of the way to our first stop, somewhere in Indiana where we spent the night. My gosh, it was raining, snowing, blowing, I'm not sure what else. I would have never been able to drive through it. No way!

We did stop at Legacy Chocolates in Wisconsin. Valentines Day was approaching so I spent a bundle on nummy confections.

Rick, Wayne, Samantha, Marcus and Andrea were also members of our MN party. They reached the motel shortly after we did.

Friday morning we headed for Kentucky. I had never been there and was looking forward to checking out a trail in a 'new to me state'. The weather was much better on day 2 of traveling and it was so awesome to see GRASS instead of SNOW! Yippee!!

It was chilly. I was glad I decided to wear a long sleeve top. Later on in the race I tied my jacket around my waist, warming up a bit.

Man, I had a tough time. Under trained and lots of hills-more than the Superior Races, I think-had me hurting. I had moments of 'wow, this is just great to be running trail again..' but the moments of 'good lord woman, get a move-on' were frequent!  I just wasn't moving very quickly!  I was making many potty stops in the woods-I don't know what the problem was. Probably that I got behind on calories and then was trying to make them up. Not a good idea. I know better.

I had a grand time, it was so much fun to see my friends out on the trail, enjoying what we do. I will never grow tired of running trail with friends. I was able to enjoy 8:30 on dirt trail, in the woods, off of the snow, with great people.

As I came into the finish I was kind of shocked to see that I wasn't last and that others were still hanging around. I came into the building and there was my group of friends, having a good meal and conversation.  I feel blessed. This road trip is just what I needed!

Next up is Superior 50K.  With a bit of training, I am hoping I feel better at the finish line.