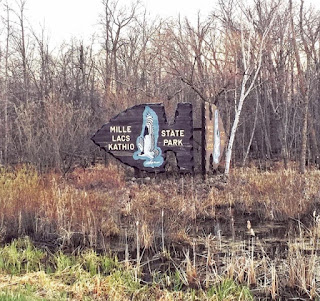 This past week I made the decision to make an effort to run all of the Minnesota State Parks. There are 67 in my beautiful state and I can't wait to set foot into every one of them!

I ventured over to Mille Lacs Kathio State Park last week and began my quest. Kathio is an hour away from my home so I made the decision that it was OK for me to travel that far during the Minnesota Stay Safe Plan. As I pulled into the lot I noticed there was only one other car parked, that surprised and delighted me! 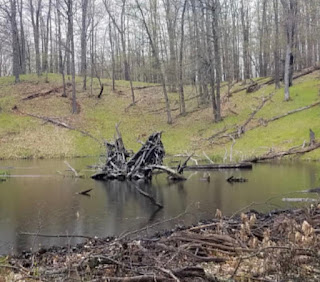 I had a very stressful week and realized I hadn't looked up any Kathio information before I left for the park. I once visited years before, before I had children!  It had been a while.

Checking out some of the trail map signs I saw that there were 35 miles of hiking trails so that looked like a good place to start! The trails were in great condition. The leaves were starting to open, there were signs that summer was eventually going to be arriving. Green grasses were budding, leaves and ferns were beginning to unfurl.

Running from the trail center toward Ogechie Lake I came upon two campgrounds,  the Touch The Earth Trail and then Ogechie Lake. It was beautiful, lots of rolling hills, well marked paths. I enjoyed the trails very much.  I was seeking solitude, peace and prayer and that was what I received. What a gift. Before I knew it 20 miles had passed. I was going to run the remaining 15 miles the next day.

On day 2 I knew where I was going to go. I wanted to check out the observation tower, and Black Bass Lake. Again as I pulled into the lot, nobody was there!  I was so happy!  I filled up my pack and changed into my trail shoes. Running along the trails toward Black Bass Lake it became very low and very wet. The ferns were amazing in this area and it smelled so rich - so fertile. 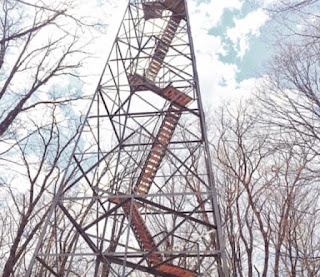 After draining the last of my bladder I looked down at my watch and realized three hours had passed. I was so deep in thought, I hadn't noticed time pass. I began to watch the trail signs and made my way back to toward the visitor center and the observation tower.  The tower was so cool. It is 100 feet tall and use to be a fire tower.

On the way home I stopped at Lake Mille Lacs to eat a packed breakfast of chickpeas and romaine. Yum.  I soaked my legs into the big round lake, walked around the shoreline trail and then was ready  to head on home.

I feel so blessed to be able to run for hours, in beautiful places. I do not take it for granted. I've been on the other side and know too well what that feels like. For now, I'm enjoying fully the feeling of traipsing down the trail, enjoying God's gifts.

Let's hope  that I can carry a bit of the serenity I was able to cultivate at Kathio into this next week!
Posted by Julie B at 12:50 PM No comments:

Well let us see, we are now 9 or so weeks into Covid territory.  My daily existence revolves around my home. I go into the office two days a week; a mere 7 mile drive. I work from home the remainder days of the week. I run out at Lake Maria State Park, 15 minutes away or run in the Wildlife Refuge, even closer to my home. I grocery shop in town, haven't ventured anywhere else. In normal times, I'd drive to Maple Grove / Minneapolis each week to run, to hit up Whole Foods and Costco. It's been 9 weeks since I've been to any of those places. I practice yoga at home, I knit at home, I bake and prepare meals at home, I garden at home.

Some restrictions have been lifted this past week.  Groups of 10 are able to gather while practicing social distancing. I won't be gathering. Clinics are taking appointments with precautions. I have an appointment June 1. I will wait at the car, check in on my phone, have my temperature taken, be escorted to the office while wearing PPE. Gyms are still not open so I'm using my home equipment which is fine. I don't see myself returning to the gym...at all. Home workouts are fine. Manufacturing plants have reopened, curbside restaurant pickup and delivery. No churches, schools, bars, concerts, etc.

We've become so divided. This has all become so political. It seems the Republicans want everything open and the Democrats want to keep it shut down. I just follow the rules. I am not taking chances. I will be as safe as I can be.

My races continue to cancel. So far the races on my schedule that I entered and were cancelled are Chippewa 50K, Grandmas Marathon, Superior 50K and Black Hills 50K. Chester Woods 50K  has been postponed to November. I'm waiting to hear on Voyager 50 Mile, Superior 50 Mile. Honestly, I prefer to have the Race Directors make the decision rather than me. If any of these races were open I probably wouldn't have attended anyway and since they are cancelled I don't have to ponder my decision making processes.  It's a good time to stay healthy, run all the miles and take advantage of all of my free time.

I've set a goal to run all the trails of all the Minnesota State Parks, of which there are 67.  I love our state parks and there are some I have never set foot into. There are miles of trail for me to explore. What a lovely way to spend my time. I'll begin this weekend.

Covid 19 has thrown me for a loop but I am making the most of my downtime and enjoying that as much as I can.