Another incredibly fun race experience for me this past Saturday. I feel so blessed to be able to spend time on my feet, in the woods, feeling nothing but joy. It sounds so ridiculous but it is so true.

Just 8 months ago I didn’t think I’d run again, ever. It is just amazing to me how the body can recover, as well as the mind.

Saturday was a lovely day. I awoke early, consumed 2 ripe bananas and headed out to Savage.  It was crazy windy, winds up to 45 miles per hour but the sun promised to shine with 45 degree temperature. Awesome.

Another incredibly fun race experience for me this past Saturday. I feel so blessed to be able to spend time on my feet, in the woods, feeling nothing but joy. It sounds so ridiculous but it is so true.

Just 8 months ago I didn’t think I’d run again, ever. It is just amazing to me how the body can recover, as well as the mind.

Saturday was a lovely day. I awoke early, consumed 2 ripe bananas and headed out to Savage.  It was crazy windy, winds up to 45 miles per hour but the sun promised to shine with 45 degree temperature.

I pulled into the lot 45 minutes before race time. Time to collect my bib, lube up my feet and mediate for a while. It was a splendid start to the day.

We began in the dark, I didn’t bring my headlamp as it was a 7 am start and the trail would be light, soon.

The course is 5000’ elevation during the 34 miles. I was able to run most of the hills, I was really amazed at the strength in my legs. There were times, many times, when I looked down at my watch and saw that I was running a 945 – 1015 mile pace. I would become anxious and immediately tell myself to slow down. I am not sure why I was so afraid of running too fast. I suppose it is because that is out of my comfort zone. I am use to running more slowly, that is where my emotional comfort level is.

I asked myself why I felt anxious, why was I afraid of running this pace when my lungs didn’t hurt, my legs felt good, what was I afraid of?  I was afraid of the unknown things, the  things that could go badly in a moment…but should I fear the unknown? Should I fear that things could  go badly in a moment? I decided not to  think so and this brought up many other fears that I allow to control me.  I had quite the deep conversation going on with myself.

I decided just to run upon feel, quit fearing that I am running too fast.  Quit looking at the watch. Just run. Just enjoy. 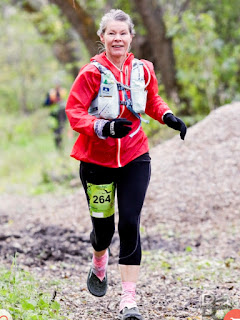 In my pack I had all that I needed for the race so I didn’t need to stop at the aid stations other than once to refill with water and  to dump my trash.  I began with 60 oz of tailwind and 10 humma gels.  I drank the 60 oz of tailwind,  20 ounces of water, 8 gels.

At the halfway mark I looked at my watch and saw that I came in at 3:20. I couldn’t believe it. The course isn’t easy-it is constantly climbing  and rolling. My legs felt strong though, I was able to run many of the hills. My feet didn’t hurt, my legs weren’t tired, I didn’t have stomach upset. I felt great. Feeling great but reserved, feeling that I didn’t want to be too excited about feeling great because that could change to feeling like hell quickly. I stopped myself from having those thoughts. Enough!  Just enjoy right now.

I realized that I could possibly come in under 7 hours. My original  thought was under 8 so thinking about taking another hour off was pretty incredible.  I had a brief thought that even splits would bring me at 640 and that was a blast from my past running days. I quickly brushed that goal away.

I filled my pack with water, dumped out my empty gels and trotted on off. I felt so great. I skipped through the aid stations, laughing, spinning around under a disco ball, moving along with joy.

I didn’t see anyone on my second loop. Not a soul for 16 miles.  I was deep in thought.  I was calling myself out on the stories I tell myself.

The wind was howling, sometimes pushing me forward, sometimes pushing me back. The trees were SO beautiful, colored so brightly. I stopped a few times to push my hands against the tree, to feel my feet on the roots, to ground myself, to think the deep thoughts, to peel away my layers. This is why I love to run. I can feel. Running always me to feel.

The last 3 miles I ran sub 10s. WHAT? Who is this girl? I was having so much fun, I realized I felt safe in running faster because there was only 3 miles left. I had plenty left to leave on the trail. I felt my hips push me forward, my toes push me off, my arms pump as I ran quickly down the trail.

Joy. I was filled with joy by the trail and left joy behind on the trail.  What a blessing. What a day.

A few months ago I cleared my schedule to volunteer to Eugene Curnow Trail Marathon (formerly Half Voyager). I've run the race many times, in fact, it was my first trail race many many years ago, back in 2000. I was looking forward to it.

The trail running community is booming!  This is SO good. We need new people to come into the sport, to keep it alive, to keep it breathing. Although I may sometimes complain that the trails are sometimes crowded and that I recall fond memories when only 18 of us finished Superior 100, that doesn't mean that I dislike the growth. I don't. I welcome it and love to guide new trail runners to the best of my ability. I remember what it was like to be new to trails.

There were 429 finishers at Curnow this year!  The race sold out and  I don't think that has ever happened before.

I was assigned to Forbay, Aid Station 7 (out of 8) along the way from  the Duluth Zoo to Carlton. It's a beautiful trail with bridges, powerlines, rivers, grass, dirt, rocks and a whole lot of heat and humidity. There was no rain, little mud. Lots of fun and friends. 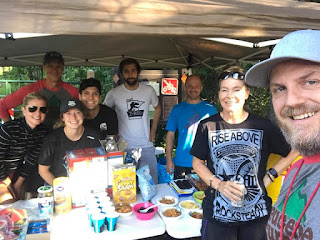 
I arrived to Forbay for duty at 745. Jamison was captain, Lisa was medical, Lynnea was assigned to cross guard duty-out in the beating sun. I was under the shaded canopy tending to the supplies. I cut watermelon, bananas and oranges. Filled up potato chip, grape, candies and pretzel bowls. Made sure there was plenty of Coke, 7up, Gingerale poured.

We had cowbells to ring as the runners arrived to our station, lots of hugs, congrats, filling of packs and bottles. Reminding runners to take salt, to eat, to drink. I was shocked that at least a dozen of the runners didn't have a water bottle or hydration vest. They were only drinking at the stations which were spaced out from 2.4 to 5 miles. On this hot day that was just too long to go without water, in my opinion. However, I always seem to error on the side of caution. A few runners sat down under our canopy to get out of the sun. We offered ice for hats, bras and buffs. Nobody dropped at our station (mile 20.5) everyone continued on.

It was so much fun to see so many of the people I love and the new ones that I'm getting to know. It was like one big friend banquet. I had to laugh as I was in the shade sweating to death and as I'd hug a runner friend they'd exclaim 'oh, you are so hot' yeah. I'm hot and sweaty and not running and standing here in the shade. We'd laugh. This must have happened 15 times!  Menopause you know. Hot flash city.

Such a great day, great friends, great fun. Volunteer. Give back to your sport!  You'll love it just as much as I do.
Posted by Julie B at 3:35 PM No comments: