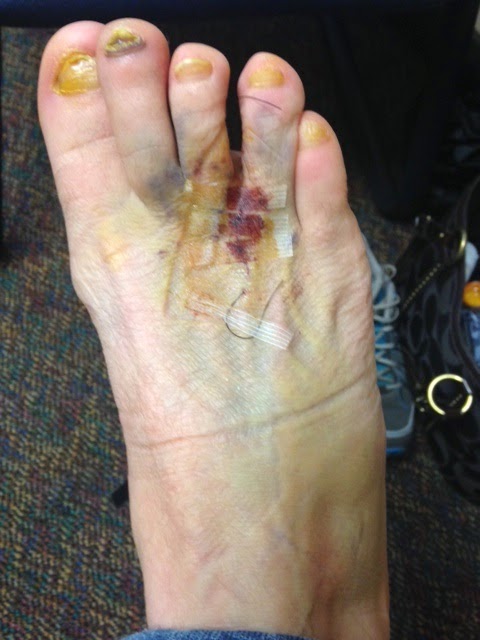 I had surgery for removal of Morton’s Neuroma on January 9. It was a pretty painful recovery for the first few days, but nothing like walking around with a tennis ball under my foot prior to surgery. I experienced quite a bit of burning, swelling and immobility. I sat in the recliner with ice on my leg to cool the blood going into my foot and kept my foot raised for the first few days. I took a few pain killers those first few days but then was ok with Advil.

My surgeon restricted work, driving and activity for the first week. She told me that if I over-did it my foot would let me know. Last Sunday I over-did it.  I went to WalMart before Church and then to my sister’s home to visit her new puppy. My foot burned all night long. I couldn’t imagine having the stitches taken out the next day and going without my surgical shoe.

Yesterday I drove Troy back to the U of M after his 5 week Winter Break at home. I then drove myself to my surgeon. She removed all of the dressings, pulled out the stitches and told me I could run next week!  I couldn’t believe it. I couldn’t believe that I would be wearing my Inov-8s home. Yup. I slid into the shoe and walked around a bit.  Amazing. She wrote me a medical note for work releasing me of all restrictions, work and otherwise. Woot!

After I arrived home I told Topaz we’d go for a slow walk.  We walked up and down the driveway a few times. It never felt so great!

My foot looks ugly and sore..but it is getting better each and every day. Yippee!