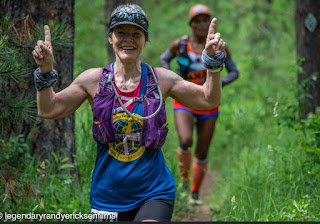 On Friday morning I began my trek west to Sturgis, SD. I again had lunch at the beautiful rest stop in Chamberlain SD with Dignity statue, drove through the Badlands and Custer National Park, some hiking to Harney Peak and then landed at my cabin in Sturgis at the RV park. It's a clean campground, $49.00 cabins and just a great place to stay as they are the packet pickup location and the start of the 100 mile and bus rides out for other distances are only a few blocks away.

Saturday I woke at 4, ground my beans for my french press, dressed and packed. I was out the door around 545 to catch the 600 bus. I met Jenny who was also running the 50K, we rode the bus together to the start.

It was a beautiful day, dry, with a high forecast to be in the low 70s. Picture perfect.

Our bus arrived to our start - the 70 mile stop of the 100 - before 7 so we had over an hour to hang out. I was looking for Erika to come through as she was running the 100. I was also looking for Amy, as she was pacing one of her friends. Pretty soon I noticed a blue Bill Pomerenke shirt. Sure enough, there was Andy, Erika's husband, pacing. I then saw Erika. I ran over and gave her a hug and congratulations on her 70 miles covered, and after running Kettle 100 two weeks prior. She finished Black Hills, too. Amazing.

Finally 800 was near and we here herded down to the start. Off we went!  We were all on top of one another for quite some time as there are quite a few cattle ramps in the first few miles. They have to be taken very slowly as they were wet and slippery. I just hiked, took my time, moving forward. It was cool to know what would be coming up, to remember portions of the course. 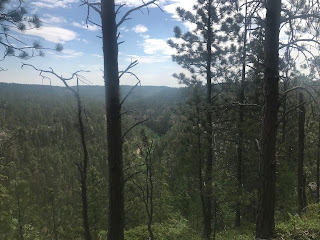 The course is really amazing. Long climbs straight up, single track coming down, over and over. There were some jeep roads, some ATV paths, mostly singletrack. I'd run through soft pine trail, such nice footing, to hard small rocks interspersed upon the trail, to sand, to grass. The views were amazing. Jagged walls of rock, soft rounded rock, vistas overlooking the forests below.

In 2018 there were ropes to help cross the rivers, the water was over my waist. This year there was NO water in the rivers. NONE. It was so dry, although it had rained the night before. The ground sucked it right up as the trail was not wet or muddy at all.

As I was running up one of the dry creek beds, littered with rock, I fell. All of a sudden I was down flat on my belly with a sore knee and skinned nose. I lay there, stunned. A man who nearly fell on top of me helped me up exclaiming 'damn, now I've lost my pacer'. He just wouldn't pass me, he stayed directly in back of me for miles although I asked him to pass. I was glad to see him go on. I should have just stepped off the trail earlier and forced him to move on. I walked off my pain, making sure my knee was stable and that I couldn't see any bone. It was mostly a skin wound I think, it swelled and bruised quickly. I wondered if it would knock me out of the race. I vowed to pay attention and would not over do it by any means. I didn't mind dropping from a 50K if that's what my knee needed.

Eventually I caught up to the people who passed as I was laying in the trail. I was feeling pretty good again. My knee felt swollen but not real painful.

It was great to cheer on the 100 milers as I came upon them. Some looked terrible, some looked fresh. I knew what they were going through. I moved along, enjoying right where I was, running free.

At the final aid station I saw part of Erika's crew. They expected her to finish around 33 hours or so. It looked like it was going to storm, I wasn't sure if I'd be able to hang out at the finish to watch. I was so glad that she was still moving forward. 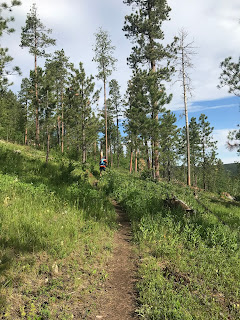 Pretty soon I hit the pavement, knowing that I was only 2 miles to the finish. I finished in 2018 in 7:58 and it looked like I could finish in 730 this time around. I was pretty amazed. With a fall and a sore knee, I was still going to PR the course.

Running into the finish line, collecting my finishing coffee mug, breathing a deep sigh of gratitude.  This. This is what I love to do. 7:22. Wow! 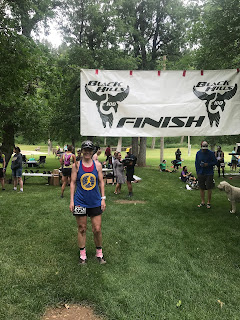 I wasn't sure how the legs would feel for Chester Woods 50K after running Superior 50K only two short weeks prior. Luckily, I was feeling completely recovered and ready to roll! 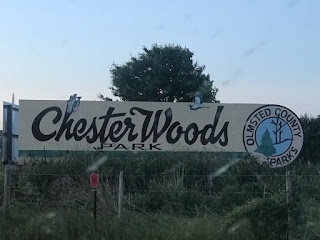 With a 600 AM start I set my alarm at 2AM so I could leave home by 3 and arrive to race site by 530. Everything went to plan. I pulled into the lot at 530, collected my number, packed my hydration vest, worried about the 98F heat forecasted and rolled out to the start line. It seemed that some participants had decided not to start, the group seemed pretty small. We didn't have a wave start nor did we wear masks. Covid was in the rear view mirror. I'm thankful to be vaccinated. 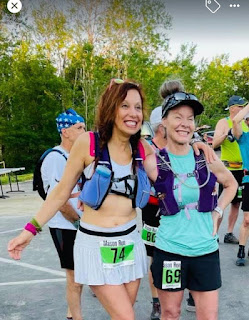 I scouted out Amy and Steve, saw Carl and Dave, Lynn and began to run. Oh man. Hot. Amy and I ran together the first 8 miles or so, enjoying our conversation and the landscape. It felt pretty good so early in the day and there was a good stiff wind that didn't yet feel like a blow dryer to the face.

As I finished up the first loop in less than 2 hours I became disoriented as I saw so many people - like tons of people at the start. They then began to scream and cheer for me. It was crazy. I then realized that they were the 5K/10M racers. I quick went to my car to refill my bladder with tailwind, drank .25 can of ice cold coke and ventured on back to the course for loop 2.

Dodging the runners waiting for the start was chaotic. They were so kind, cheering me on, yet I was being careful not to run into anyone. Sweat was rolling into my eyes, making it difficult to navigate! After running half a mile I could here them come upon me. It was nice to see new life, new legs, new energy running alongside of me. 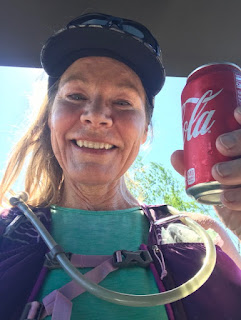 Loop 2 was great!  I kept on keeping on, saw Jim and Bob, Carl, Lynn and Dave. I ran the loop solo, just kept chugging along. As I was finishing up a man caught up to me. When he told me he was running the 10 mile I commented that I was finishing up 20. He said 'oh, here I thought I was catching up to a fast person. I assumed you were running the 10. I looked at him like he was a nutball and apologized for not being a fast 10 miler as he wished. Good grief! Finished up in 2:14.

Running into the start / finish the second time was very quite. I didn't see a soul. I refilled my bladder again, finished off the can of coke, grabbed a few gels, a puff off of my inhaler..the heat and humidity was taking it's toll .. and moved on out of there.

I knew the last time I ran this I finished in 644 and I really had felt I could beat that time..until earlier in the week I saw how hot it was going to be. Running into loop 3 I was still feeling OK, thought it could still happen. I put some ice in my hat and bra at the aid station, lubed up my feet again and kept on pushing. There were wide open meadows where the heat was insane. I just put my head down and tried to jog on through. The shady wooded areas were amazing.

Running past Jim again I gave him a hug, knowing that he'd be finishing up 50 miles soon after my 50K. I met Amy on her way back out as I was coming inbound. I was going to finish this in a PR course time. I reminded myself to take care of myself. Keep drinking, keep gelling, when dizzy slow down, keep pushing but don't push too hard!

I ran into the finish at 626. Yeah!  First GrandMaster Woman and a Course PR. Tough day in the heat, but I'll take it!

So much fun visiting after the race, watching my friends come in. Just like pre Covid times!

I'm so grateful to be able to run again, to be free, uninjured. What a blessing. One I hope to continue.