Jay Cooke State Park holds so many amazing memories for me. It's the start/finish of Voyageur 50 Mile Ultramarathon. I've run the race 10 times and have grown to love it so much.  Unfortunately, last year I broke my ankle the week before the race so volunteered instead and this year it has been canceled of course, due to Covid 19.

Maria and I decided to run a long run through the park, then out on the Superior Hiking Trail yesterday. We met at the visitor center, just steps from the beautiful swinging bridge. Our plan was to run 22 ish miles by running an out and back.

Jay Cooke has trails that link up to Willard Munger State Trail and to the Superior Hiking Trail . There are over 50 miles of trail and many water accesses. There are 80 camping sights. It's so beautiful and only a 2 hour drive from the Twin Cities.

We began at 715, not another person was in the parking lot. It was quiet and wonderful. The trail was in perfect condition. The day became warm, up to 88 degrees. We each carried 60 oz in our packs and I stuck another bottle of water in my vest pocket. It wasn't enough. I was salvaging water throughout the day but would have consumed much more if able. Maria ran out as well. We could have done with another bottle, which we both had in our cars!  We survived and didn't cramp up or have any problems. 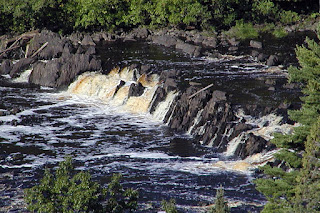 Large frogs were rustling up the leaves on the trail, we couldn't figure out what they were at first. The leaves were moving and pretty soon we noticed the large frogs. So cure. Maria led most of the way so had to deal with the sticky spider webs across her face. I was stung by a  hornet in the ankle. Typical for Voyageur!   The river was low. The views were incredible. We would stop every once in a while and just look around at the beautiful landscape. Woods, bridges, sky...I felt like I was running from the darkness and into the light. Running does that for me. It empties me out, yet fills me up. It is my jam.

It really felt good to run with another again, it's been months. We stayed apart, were outside and not in close contact. We had a blast. 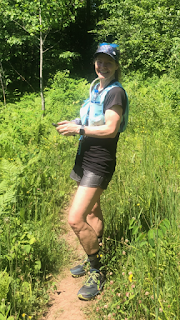 As we came back into the lot we noticed that every parking spot was taken. We had only encountered 6 others all day long on the trails.

After we finished we cleaned up and sat outside of our vehicles, caught up some more, hydrated and refueled with clementines and mango black bean salad. A great way to end such a fun day!

What a glorious day and beautiful run! I feel so blessed to be healthy and out spending the day just the way I love to. Never to be taken for granted.
Posted by Julie B at 10:36 AM 2 comments: