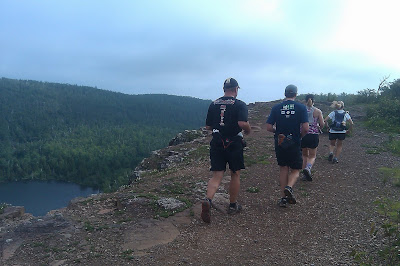 Wow, another BETA post! I would have never believed that the wonderful BETA weekend would have taken such a hold. 6 years so far, awesome. Thank you Scott Wagner for starting this 6 years ago. You'll have to go back to the other BETA posts for a history of what BETA is.

We were a group of 10 this year, heading up to our BETA house in Tofte, along the North Shore.

Check in is at 4 PM, I wanted to pick up the keys and have the house opened for the first arrivals near 5 PM.

I ran from Caribou Highlands, to Oberg and back, 14.8 miles per the GPS. This route is along the 50K/25K/50M/100M Superior races so I know it like the back of my hand. It didn't disappoint. Such a beautiful trail. I spotted huge mushrooms, blueberries and raspberries. While picking berries I heard a thrashing in the woods and was afraid I'd find myself sharing the bush with Mr. Bear. Nope, Mr. Bear was Mr. Chipmunk! Ha!

The day was very humid and hot, a rarity for the North Shore, even in July. I was dripping wet and was struggling while climbing Moose Mountain and Mystery Mountain. My body is not the same as pre hysterectomy. I'm hot and sweaty all of the time and my heart rate is elevated while climbing. It is what it is, nothing I can do to change it. Just enjoy the surroundings around me and WALK. That's what I did.

I covered nearly 15 miles in 4 hours, took a cold shower and headed to the house. Maria, Doug and Bill arrived after I unpacked my gear and settled in. Nancy, Tom, Alicia and Jeffrey arrived next, then Guy and Jenny later in the evening.

For our run on Saturday, Nancy, Tom, Alicia and Jeffrey were headed to one end of the trail and the rest of us were headed for another. Doug was going to venture for a run on the trail with us instead of crewing which was a first. It was so great to have Doug running with us! When Doug mentioned he was going to run 11 miles instead of the 26 Maria, Bill, Guy and Jenny were going to tackle I quickly stated that I was in for 11 as well. I was feeling the Afton 50K two weeks prior and Friday's 4 hour run in my legs. 11 was perfect, I thought.

We dropped water and cars along the route and then began our run in Silver Bay. I love this section. Well, I guess I love all of the sections! Silver Bay to Tettegouche includes the Bean and Bear Lake overlook. So awesome and so many great memories of past races and past BETA's. We spoke of Pierre and John's crash here during BETA 1. Pierre stating "I'm Bonking!" John wishing for Red Bull! Good stuff.

By the time we reached 7 miles I was totally soaked and huffing and a puffing. My breathing was heavy, my heart rate was high and I was really having a hard time. I was sweating so heavily, as was everyone. It was hot and so so humid. Our bodies couldn't evaporate and cool in this humidity.

Bill lead the group and was quickly out of sight. Maria stopped to allow us to catch up atop a huge rock outcrop. I reached the top and just laid down flat on my back to catch my breath. Ugh. I stated that if we had a car right here I would stop and head back to the house. We were all going to be running out of water, it was so warm we were drinking more than planned.

I followed at the end of our train, winding up the trail. Eventually I told Doug to just keep on, I was going to take a walk break. I had to catch my breath. I couldn't run and breath correctly. I walked through a few shady areas, just taking in all of the beauty of the trail. I wasn't pissed off at all that I couldn't run through this, I was fine with walking along. This is just such a turn around for me. I have always loved running in the heat and humidity. My PR 100 Mile Race was at Lean Horse, at near 100 degrees. I found myself thinking deeply about many many things as I walked along. Eventually I began to zone out and wonder if I was on the correct route. I had better pay attention!

With the State Parks closed due to MN Government Budget disagreement, there weren't many people out on the trails near Tettegouche Park. I knew I was nearing the finish for me as signage posted the state park. Guy's car and water supply was at mile 11. I was so thankful to have made it this far! As I was coming down the end of the trail, Jenny was climbing back up to me, with a bottle of water in hand. Ahhh, I quickly drank the water she offered and called her my trail angel. As I came into the lot Doug poured me another bottle of water. Ah, refreshing! They had been resting 15 minutes before I arrived. Guy and Jenny decided to end the day at 11 miles too so we all took off and headed back to the house for more water and cold showers!

Doug, Guy and Jenny went back to pick up Bill and Maria. I believe Bill ran 18 and Maria 26. Lots of miles on a horrific humid day.

I hung out on the deck, reading, then walked along the rocks at our backyard, Lake Superior. It really was nice to be able to enjoy the house and landscape, not running all day into night. Nancy, Tom, Jeffrey and Alicia arrived with Tom and Alicia running 23 miles. Great work!

We had an incredible dinner, lots of fun conversation and made new friendships. Another BETA weekend, more memories and fun running. Next year: BETA VII!

*More photos posted on Facebook.
Posted by Julie B at 3:20 PM

I feel like there's got to be a way to manage the sweats--there's got to be. You're really resourceful and know all about how food affects the body. I'd do some research. I know you'll be 100% again!!

such a cute Site.please visit for more.....

Thanks for the info on the headbands!! Between work, workouts, and play, I also wear them at some point everyday!

Your story is so inspirational. I love the food you feature on here! have you tried Greenie Guru Juice