The course is a single- track mountain biking trail – lots of hills – in the woods of Western Wisconsin on the Whitetail Ridge which consists of a  loop of 7 or so miles-which is run as many times as possible, until  the 8 hour limit expires. I love loops. I love a drop bag at the start/finish. Easy peasy fun o rama!

Saturday was a beautiful sunny day!  I arrived to the course about 45 minutes before race time. I wasn’t sure who was going to be running as  there wasn’t a list of entrants on the website. I was so happy to see Robyn and her mother as I pulled up in  back of them.

I walked a few steps and saw Kevin, a few more steps to the start and there was Jim, Matt and Zach!  It was so good to see them again. It was going to be a party on the trail! We kidded around about ‘way back in the day’  and that we were ‘old school ultra runners.’ I guess so.

As I was waiting in the line for the bathroom I saw Duke!! No way! I haven’t seen him in years. When he told me that Eve was here, too, I was so excited!! Eve had an ice house set up near the start/finish to help crew for Duke. We squeeled in delight and hugged and laughed!! Man I’ve missed these two!

I placed my drop bag on the tarp and packed up some gels, music and a water bottle to carry. We were about to begin so I lined up near the back. Off we went!

The course was really great. Woods, lots of hills-constant up and down. There were two aid stations set up plus the start / finish. Awesome. I ran a comfortable pace, no goal other than to stay healthy and to have FUN!  That was the order of the day.

I had an absolute blast.  The first loop I ran alone, just taking in the sights. I was warming up so made a mental note to drop my long sleeved shirt at the start / finish. I removed my gloves,  ate a gel every 30 minutes and just moved along, enjoying the woods.

At the start/ finish I dropped off some clothing and noticed that Jenny brought her new puppy, Jasper!  OMG, I kissed him and held him and let him chew on me and let him lick my happy tears!  He is just a little ball of love fuzz. As I ran out of the start/finish I had Topaz on my mind and just began to gasp and bawl. I just miss him so much. I know that I am lucky to have had him in my life for 14 years and I know that those years were well worth the feelings of sadness I have now..but I still miss him and cry and am mourning him. 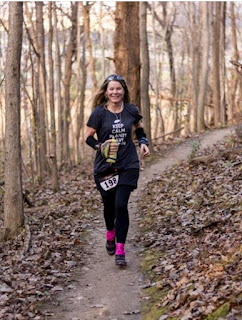 Somewhere during this loop I ran into Janet. Janet finished the Gnarly Bandit last year so our conversations during the next loop centered around that. She was now training for HURT and looking to run without becoming dehydrated. It was fun to run a loop with her.

Back into the start/finish. More hugs and kisses to Jasper. I carried him around a bit and just loved on him. 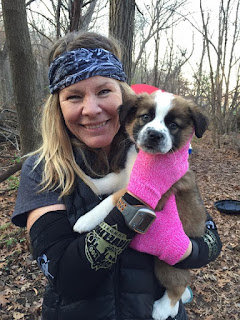 I just really had a lot of fun. I spent the next 20 miles alone, just reveling in my thoughts, prayers and meditations. I never felt tired or grumpy or like I wanted the race to end. I just ran and ran, happy in my surroundings and thoughts. I never even played any music. 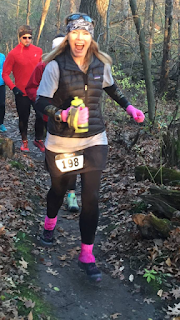 Before I knew it 7.50 hours had passed. I came into the start finish and was instructed to run the out and back mile for the duration until 8 hours had passed.  As I was running back and forth I saw John and Bill cheering us on. What a great time!  At the end of 8 hours I had run 36 miles. I was thrilled.

Wow, I didn’t want to leave the party. I helped to clean up and tear down the tents.  I cuddled up and carried Jasper around for a long time, played with him and had him follow me around. He helped to hear my heart a little bit. What a love bug.  After visiting  with Duke and Eve, Bill, John, Jim, Matt and Zac for a very long time, I watched them all leave and decided I’d better do the same.

I will certainly run this again next year. I drove home with a big fat smile on my face!