...And The Cholesterol Numbers Are In! 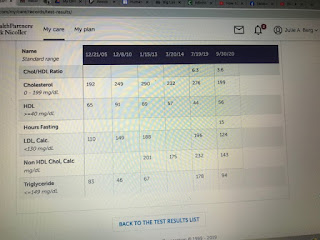 I have been struggling with high cholesterol/triglycerides for as long as I can remember. I have a strong family history of the same as well as heart disease, cancer, diabetes, stroke, alcoholism, you name it, I have it.

In 2008 I began to eat a vegan diet. In 2014 I curtailed higher fat vegetables and oils, in 2019 I became even more strict as I began began a SOFAS free vegan diet. Salt, oil, flour, alcohol, sugar free. Of course, I've been sober for 24 years so the alcohol was really not anything new.

My numbers just wouldn't come down!  14 months ago, while I was at the clinic for my broken ankle my Dr. told me she wanted to run another cholesterol test. Arg. The numbers were higher than ever. My body is really good at creating all of the cholesterol it needs.  My Dr. was adamant that I begin statins. I respectfully disagreed with her. I have ultrarunner friends who have used statins and have had negative effects. I didn't want to go there. I wanted one more try at lowering my blood glucose, cholesterol and triglycerides. My Dr. was not agreeable. I wasn't going to fill any prescription for statins and I wasn't going to see her for another year.

I contacted Chef AJ, who has become a SOFAS mentor to me. She suggested I contact Dr. Esselstyn at Cleveland Clinic for a consult. I couldn't believe that I could just call him up but that is exactly what I did. I  called him up and he outlined to me what I needed to do.

He told me that for at least three weekly runs I should run them as fasted. This would allow me to use the fat that was stored in my blood. I should also lengthen my fast between meals, for the same reason. He suggested I decrease the amount of starchy carbs I consumed such as potatoes, squash, peas, etc. NOT eliminate, just decrease. I should increase the amount of non starchy carbs I consume. In addition to not consuming added fat or fatty vegetables I should add 1 T of ground flax to my diet daily. This would increase my good cholesterol. No nuts, no oils, no avocadoes as usual but yes to the flax. Also I would increase my sleep by 1 hour, practice meditation, massage, yoga, etc. in order to relax and decrease my cortisol production. I was on board. 100%.

I learned so much about myself as I began to follow these steps to lowering  my cholesterol. I learned that I have a deep mentally hurtful connection to certain foods. I broke those connections, it wasn't easy but it was doable. I was hoping the payoff would be great. I followed all of the steps he laid out for me with 100% compliance and diligence.

Yesterday I had my mammogram, blood draw, physical, etc. I nervously awaited my blood draw results to show up in My Chart. When they did I was SO thrilled!! My numbers came down. The pay off was great. All of the steps to wellness are now habits, I will continue on this path.

My cholesterol dropped 78 points, triglycerides down 90 and glucose down 15. Yeah!

My Dr. was as excited as I. She asked a million questions while talking with me on the phone last night and has set up a Zoom meeting to discuss my lifestyle changes. She didn't think this was possible. I knew deep in  my heart that I could change this path. I'm so excited!  Now hoping all of the other annual tests come back as well as the blood draw did.