I am so happy that I was able to run yet another Voyager 50 Miler Trail Race. Voyager was my second 50 mile race way back in 2001. I finished an hour after the final cut off of the race, when the cut off was 13 hours.  It has now been lengthened to 14 hours.

In 2016 I hurt myself badly. Tendonitis, stress reaction, vascular cellulitis. I finished but was quite a mess.

2021 was a breeze! It was hot and humid, but so delightful to be out running at one of my favorite races again. 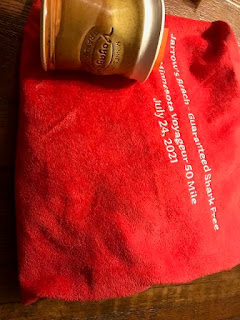 My alarm woke me at 2AM, I left the house by 3AM and arrived to the start at 530, :30 minutes before start. I drove through a mix of hail, rain, thunder and lightening. We needed the rain but I did wonder what it might do to the trail.

The race was limited to 250 starters but I believe only 168 registered. It was a small race. A very very fun race!

We could start anytime between 6 and 7.  I lined up to start at 6:10 with Jim and Bill. We ran very easily down the paved path the first mile or so. Lots of laughing, jokes and easy running. I climbed the hills with purpose one we popped out on the trail, finding my place in the race.

After the first aid station our little group split up. Bill ran up way ahead, Jim a bit after and I slowly jogged after them. I was planning to hit the turnaround in 530 and hoping to finish by 12. 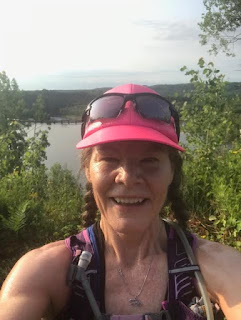 The fast 'winner runners' started after I did so it was cool to have them come up on me, chat a quick second and move on. I'd also see them come back which was the norm. It was really great to see everyone again.

Aid stations were minimal and cut in half. Water, ice and oreos I think. I drank 180 oz of tailwind and 40 oz of water. Crazy. It was so hot. I was so thankful that there was plenty of ice and water.

The river crossings were nothing but rocks. Even with the thunderstorm passing through there was no moisture. I found the rocky SHT section very slow as I picked my way up up up the peak.

I was pretty excited to see I was going to hit the turnaround at 530, where I set my goal. I decided I was going to take the time to take care of my feet. I had my only drop bag here. I came into the aid station and Bill and Jim were there. Bill was packing up ready to head out and Jim was shortly behind him. I took my time, cleaning my feet with wipes from my bag and applied desitin. Blisters were starting to form under my calluses. I'm running Superior 100 in a few weeks and need to practice caring for my feet. You'd think after all of these years I'd have this down to a science but I usually just don't want to be bothered with it and just pop the blisters as I go. This causes down time in the days after racing as I can't usually get my shoes on with popped blisters, inflammation and most painful feet ever. I knew that I had another big week of training beginning Tuesday and needed my feet to cooperate. I took 15 minutes to eat a sandwich I had packed and fix my feet. TIme well spent, it turns out. 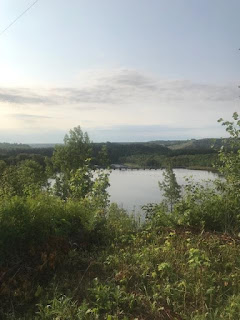 I hiked out of the turn around with purpose, ran up the hill when I could. At spirit mountain I passed Jim and just kept on trucking. The SHT portion gave me difficulty again and I made a note that I would be training on the SHT before Superior 100. I have a reservation now for August 20 to spend the weekend up there running.

The powerlines were still something else when though abbreviated as they are closed.I slowly climbed the exposed hill from hell, feeling my brain bake. I thought about the next aid station and all of the ice that would be available. This cooled me down. The power of positive thinking!

At the next aid station I came upon Bill. He was messing with bottles and taking care of himself. I had my pack filled, laughed and smiled as an aid station worker told me I had the best attitude and was doing what needed to be done. I was!  I marched out of there, heading for home. 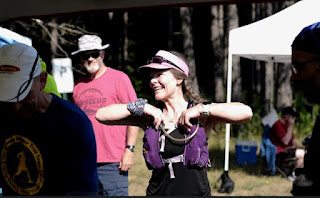 Pretty soon I heard Bill come upon me. He had been walking the last 10 miles he said. I told him to just follow me. We'd get to the finish. He did, we ran when we could and hiked on the climbs.

Eventually we came back to the bike path, knowing we would soon be finished. Bill had a bit more pep in his step all of a sudden, I told him to go for it!  He finished a few minutes before I. I made my goal: 11:52!!

I felt so great during this race, no lows, no wishing it was done, no wanting to quit, no aches or pains. It was a great day. So much thanks to the volunteers, the race staff. the ice and water!

I hung around until the end of the race, cheering in all of the runners. Hopped into my car and headed for home. What a great day!

Superior 100 is up next. Hoping I can have a good day there, too!