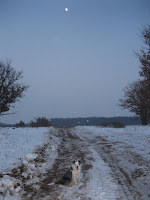 After an unusually warm fall MN has finally taken the leap into winter. Don't get me wrong, I loved our fall. Temperatures in the 60's and 70's couldn't be beat. However, I am not dreading winter as I have in the past.

After years of dreading winter and complaining about the cold temperatures every day I began to change my perception of winter a few years ago. It's working!

I began to run outside during the frigid months and after I learned about wicking fabrics and laying to keep warm, I eventually enjoyed it. I began to snowshoe run which I now can't imagine not doing every day. Because I run mainly trail and have a dog who loves to run trail off leash, we snowshoe run every day during the winter months. It is awesome fun.

A few years ago I began to snowboard with the boys. I'm not very good, I spend most of the time out there on my butt, but it is fun to spend the day on the hill with the boys.

Last year I began downhill skiing. I do enjoy this more than snowboarding and I can ski along the boys as they snowboard. I'm not on my butt quite as often!

If you dread winter and just want to curl up on the couch in your PJ's you really ought to try going for a walk in the snow. You won't feel worse upon your return to the couch!

After work yesterday Topaz and I headed for the park. It was a beautiful sunny afternoon. The wind was whipping but I hardly felt it deep in the woods. As we ran the miles accrued and before I knew it darkness was falling. There was an incredible almost full moon rise, the sky was going to bright for a while longer.

Instead of stopping at the car and heading home I filled a bottle and we headed out for a few more hours. Oh, it was magnificent! The moon rose above the trees and set eerie shadows upon the trail. The landscape changed before my eyes. I had my headlamp but never switched it on. The moon was the only light we needed.

As I was bombing down a hill, laughing and smiling, I wiped out! I felt my foot catch upon a root and down I went! I let out a yelp and Topaz turned quickly, running to me so that he could cover my face with kisses. I'm fine, fine, Topaz. I stayed on my back for a moment, resting. Just a little fall! It was hilarious. I picked myself up and we trotted on, enjoying the magnificent moon under which we were running.

A few miles later I heard a ruckus to my left. I stopped and noticed that Topaz had his ears up and was listening as well. A few moments later 6 deer crossed our path, not more than 20 feet in front of me! So awesome. The moon cast enough light, even deep down in the woods, so that I could count out the deer and watch their white tails flashing through the trees and up the hill. I wished I had my camera with me!

We ran for another two hours until we came upon my car. Exhilarated, I called the run done.

I'm going to try winter camping this season..something new for me!

Didn't you write a post a long time ago about how to dress to run when the windchill's -20 or worse? I have to relearn the rules.

Good memory,Steve! Yes, I did and I have to scan my weather rules each winter! Today at 11F I was still able to wear one layer on bottom, two on top. Getting close the the double layers.

Sounds so awesome! I love winter running but where I live we seldom get snow. I don't know that I'd be as dedicated as you are with all the snow and really cold temps. Someday, I definitely want to try snowshoeing!
Glad you are out there enjoying those beautiful trails! Love this time of year.

I have already taken out my winter running gear. I am not really looking forward to it but I will enbrace it too:) It just might take me a few weeks to get used to it.

What a great post!! I too pulled out winter running gear a while ago. What a cool thing to see all the deer--I wish I saw more in the city!

I used to feel the same way about winter as you did until this past winter when I was outdoors just about every day. Sledding, snowshoeing, cross country skiing and running in the snow. I actually look forward to the white stuff now.