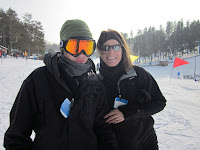 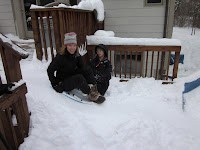 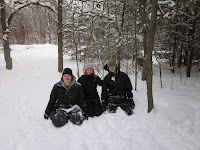 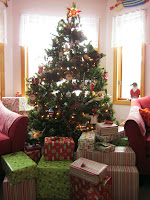 I think I just finished up the best holiday ever. It was so wonderful to have the whole family home again. Tyler had a few days off of work so he was able to stay home and then commuted on the days he had to work. We really had a great time. I was smiling and laughing the whole time, just feeling great.

I decided to take the whole Holiday off from work. It was so much fun! We went sliding, skiing, movies, travel; a whole lot of fun. Just fabulous!

I was also able to spend some time at Afton with my friends, I had a few runs with my sister and long runs with Topaz. Really a great Holiday.

This past year I just wanted to spend a whole lot of time at home. I'm so glad that I did! 2010 brought on a whole lot of change. Troy entered high school, Tyler graduated from high school, moved out and entered college, I took a break from ultra running and focused on bodybuilding for a few months, then ventured back to running.

I am not sure what 2011 will bring. I have some medical issues I have to take care of. I was beginning to have some problems as my planned BB show arrived in October and had to put it on the shelf.

As for races I have two plans. If all goes well I’d like to compete in the Ultra Gnarly Bandit Series as I outlined earlier. Four 100 mile races that UMTR is putting on. If all doesn’t go so well I have entered the Monster Series as a back up. Gotta have a back up plan! The Monster Series is a group of races that Team Ortho puts on. The first, Polar Dash, took place on the 1st. I enjoyed it very much. The second race is the Get Lucky in March, the Minneapolis Marathon in June, the Minneapolis Duathlon in August and the Monster Dash in October.

I’m also going to do a number of snowshoe races this winter. In the past I have only competed in the Northwoods Snowshoe – the snowshoe marathon in Duluth – last year was the last year it was held. I’m going to do the snowshoe half marathon in River Falls this Saturday and a 20 mile snowshoe at Murphy in a few weeks. I imagine I’ll run the Winter Carnival ½ marathon, too. It is suprising that there are so many races in January in Minnesota. I am having a sled put together by Ed at Ed’s Wilderness Systems. I want to practice pulling this winter, become confident with my equipment and winter camping; then go for the 75 at Tuscobia next December. Woot!!

I no longer make "New Year Resolutions". Most of the ones I have made in the past I followed through with and they became lifelong habits. For 2011 I am grateful, I am living in the moment, I am feeling joy. That's enough for me.

Good luck to you this year Julie! I will be at the Get Lucky! 7K and Minneapolis Half for sure:) Hopefully we can meet at a future race.

It will be fun to read about your crazy ultra races too:) Go you!

Plans are made so we can change them. Take care of yourself, Julie. I am still hoping one year to meet you:)

For me the importangt is the more we communicate, the better equipped our state will be in addressing and solving problems!