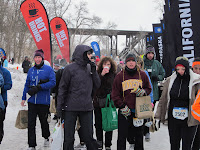 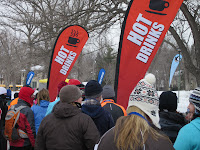 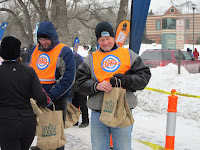 After running my first Team Ortho race last year, which was the Polar Dash 10K, I just had to come back for another Polar Dash. It really is a 'cool' race. Try cold-downright brittle frigid cold.

Last year I arrived an hour before the start and had to walk 2 miles to the start. With -20F windchill this morning I left earlier for a closer jog to the start. I still had to register so that meant an out and back before the race began.

I arrived to race start in plenty of time for close parking. I brought my heavy hooded coat to wear over my running clothes to the registration. I was toasty! Registered for the event, on a lap top, no writing on an entry form here, and entered the Monster Series. I noticed that there were shuttle buses for today's race but I didn't want to get cold waiting around for a bus. Although, the buses were prompt after the race and the organizers had gear drop. Amazing. So well organized and really, Team Ortho thinks of everything. I am very impressed with this organization.

I trotted back to my car, surfed the net, read a bit, undressed..dressed and finally went back to the start with 10 minutes to spare. The Shriners Hospital was headquarters. We were able to seek shelter in the lower level of the parking ramp-there were even heating torches to huddle under.

A fuzzy penguin announced that the race began in 4 minutes to I shivered out to the start line. I couldn't help but laugh all the way to the start line. Here are 2000 people, Minnesota hardy, ready to run a 10K when it is -17 some windchill, just for fun. What a great way to kick of 2011! I loved it.

I had no goal time really except with a hope to finish under an hour and a second faster than last year. I didn't believe this to be possible as I ran one of my highest mileage weeks this year plus skied for a day. It is only Saturday I have tomorrow to add to the weekly mileage. I'm at 72 so of course I'll run 8 to make an even 80.

I did't hear the start but pretty soon we began to shuffle-I wasn't cold but every once in a while a gust would find my eyes. The rest of me was totally covered. I crossed the start line, heard my chip buzz and started my watch. Off we went!

The course was pretty clear of ice, there was a bit of clumpy snow here and there but it was much better than what I've been running on lately. I didn't bring along my iPod, I was just going to listen to conversations around me.

We ran along the Mississippi River, up a few hills and down, a nice portion of the Twin Cities Marathon course. I had to pull down my turtlefur neck gaitor, I was getting warm. I removed my gloves as I ran up a hill, stuffed them into a pocket. I would retrieve them as I ran against the wind later.

There were course Marshall's along the course, cheering and ringing bells, taking pictures. Poor people! They were bundled up but were not running. They had to be freezing. Every one I ran past I yelled Happy New Year and they would comment on my big smile. I was having a blast. I felt great, so awesome to be running in the New Year.

At the turn around I looked at my watch and read :28. Good deal. Keep it up. Wow, made the corner and holy wind. The gusts were right at us. I pulled my gloves and mittens back on, pulled my hat down over my eyebrows and my neck gaitor up over my nose. It is quite a feeling to be running downhill but not gaining any momentum because the 35 mph wind is adding so much resistance. Crazy! I was still very comfortable, running within myself, enjoying the course.

Mile 5 and I heard a woman say "Bald Eagle" and point straight above us. There is was, gliding through the wind, effortlessly. So cool.

My eyes were watering from the wind, eyelashes freezing together. No snow today, just wind.

I crossed the finish line in 55 minutes, a few minutes faster than last year. Woohoo!

I stopped my watch and heard comments on the big smile I was wearing. It was awesome fun, everyone should be smiling! I collected another fabulous medal and was handed a Whole Foods bag-filled with banana, muscle milk, salted nut roll and other assorted goodies. Hot drinks were served, water, whatever you needed. What a class act.

I walked to my car a whole half a block away, stripped out of my wet clothes and into dry fuzzy fleece. Ahhhh...a fantastic way to start the New Year :)
Posted by Julie B at 2:28 PM

Hi Julie,
I wish I knew you were going to be running! I would of looked for you. I thought when I registered that I signed up for the 10K...my hubby picked up my race packet and my bib said 5K. I am not sure what happened. I ended up doing the 5K...it was a blessing:) I have not run in over a month! It was ugly for me...sucking air big time:)

Happy New Year to you!

Hi Julie, the 5K packet must have been your Christmas gift from Team Ortho! I signed up for the Monster Series. Maybe you'll be at Winter Carnival 1/2 or Lucky 7?

yeah, its nice trip. I arrived to race start in plenty of time for close parking. I brought my heavy hooded coat to wear over my running clothes to the registration. I was toasty! Registered for the event, on a lap top, no writing on an entry form here, and entered the Monster Series.
i liked this part of it

Great job in the 10k! I was one of the Course Marshals. It was so fun to see everyone out there running. It made me want to be running too. It was chilly standing out there but they gave us hand warmers. It is amazing how well those little things work!

Julie, thank you for serving as one of the course marshals! I sure appreciate it. I just received a few packages of handwarmers in the mail, with a pair of Yaktrax to test. I haven't yet used the handwarmers. I'll have to try them out on another cold day!