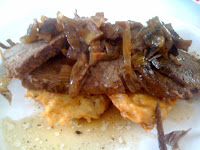 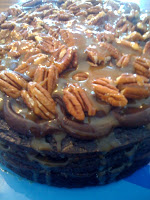 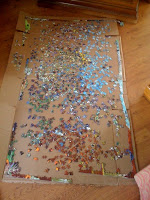 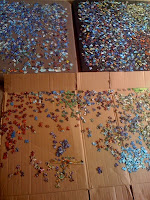 Here I am at five weeks post op. Thank goodness! I'm glad to have this whole scene in my past and to move on. I was so nervous before the procedure, nervousness that was not necessary but I didn't know that of course. I'm just glad to move on.

I am doing so well. I have had an uneventful recovery which is much better than I ever imagined. I haven't had any pain, no swelling, haven't needed any narcotics since I left the hospital, quit the Tylenol/Motrin 3 weeks ago. Really. All is well. I feel 100%.

My surgical pathology report arrived last week. It was interesting to read. I learned that I had 17 tumors upon my ovaries and fallopian tubes. 13 cysts and polyps in the endometrium and fibrous adhesion to the rectum and bladder. I had moderate to severe endometriosis. The pathology report is negative for cancers. Amen!

I had to chuckle at this: General: A very pleasant thin female, she is very healthy and is an ultra-marathon runner. Her resting heart rate is 35, upon examination 43.

I had forgotten that while I was in the hospital an alarm kept sounding, coming from one of the gadgets I was hooked up to, right after surgery. Steve looked at me in alarm and went out into the hallway to let a nurse know. She came back and told us the alarm was set to ring when my heart rate went below 50. She reset the monitor. I didn't pay attention. A few minutes later the alarm began again. She came back and again reset it, asking if I was OK. She explained again that the alarm would ring when my HR dropped below 50. This time I paid attention. I told her that if it was over 50 something would be wrong with me. I told her my resting heart rate was 35 and all I was doing was laying in bed, it wasn't going to get much higher. She was stunned. She called my surgeon and told him this info. He told her that I was an ultra runner and she could safely disconnect the heart rate monitor. It was kind of funny

I can't wait to run again! Walking is becoming boring. I am walking 40-50 miles a week. Yeah, I have time on my hands that is for sure. A few weeks ago I was walking to help with the healing. Moving the gas, strengthening my limbs, stretching my body as I had been laying around so much. After feeling pretty good I was walking for Topaz's sake. He could run and get some exercise..although he never really left my side. I guess he decided he would walk too. Now I am becoming bored with walking. I mean, I am grateful that I can at least walk, but obviously I am feeling super well since I am ready to R U N!

I am no longer walking in the neighborhood, I am now hiking the trails at the State Park. After 13" of fresh snow last week I was the first to trudge through the snow. That was quite a workout! Now the snowshoe trail is pretty well packed. Today I told myself the 8 mile walk was training for Bighorn 100. It gave the walk more meaning-a mind game of mine.

I began a puzzle that has 3000 pieces. I started last week and have made some progress.

I have been doing a bit of baking and trying out new recipes. We celebrated Troy's 15th Birthday - as a leap year baby he didn't get a 29th of February this year - so we celebrated Friday, Saturday and Sunday. He decided I should try Cafe Latte's Turtle Cake. It was a hit and tasted as good as Cafe Latte.

Food Network catches my eye every once in a while. I tried the braised brisket on Sunday with potato patties and it turned out very good. I normally don't create heavy meat meals, so Steve and Troy felt this was a treat. I had a large green salad with a bit of braised beef upon it. It was very tender.

I've been planning trips, races, etc. I've entered Chippewa 50K, Ice Age 50M and Bighorn 100. One race will cover training for the next race. I'm running Lucky Half Marathon in two weeks. I can't wait. I decided it wasn't a good idea to rush into Zumbro 100 in early April. I will be a moderate person and run the Chippewa 50K instead. See, I can be moderate :) I'll see if Larry needs me at an aid station or something else for Zumbro. I'm planning on Afton 50K, BETA VI and Voyager 50 Mile in July, need something for August, Superior Sawtooth in September, October is TC Marathon and Wild Duluth.

Friday is my 6 weeks post op appointment at Mayo. I will then be released to run, to work, to do anything my little heart desires. Thank goodness!! I am SO ready. I am SO done with this hysterectomy business.
Posted by Julie B at 11:54 AM

Bighorn is a gorgeous course. Lots of luck with the continued recovery!

So glad to hear that you are recovering so well, and that your pathology report was negative! Happy Training.

Thanks Danni and Robin!

Danni, that is what I hear, that Bighorn is absolutely gorgeous. I can't wait to see it. Made reservations today at the Elk Inn something or another near the start/finish. I'm sure looking forward to it!

That beeping machine screamed at me too! Glad you're recovering quickly, and yes, Bighorn is a gem for sure. Get well.