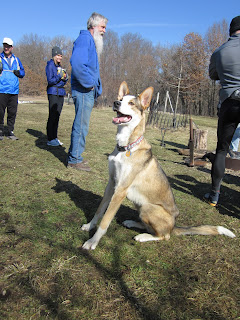 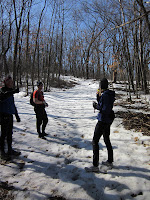 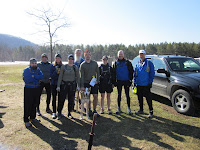 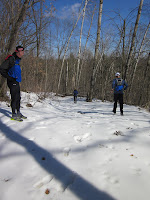 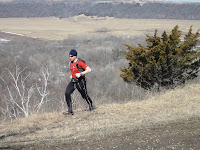 Yesterday I headed south to Zumbro Falls to run the again annual Zumbro Fat Ass. I arrived earlier than the 10:00 start time so ran around the Bottoms for a while before others arrived and while others were chopping and stacking wood for the aid stations during the Zumbro 100 next Friday.

I became warm while running early in the morning in pants so changed into shorts prior to our trail run. Ah, the first run of the season in shorts. Nice!

Daryl and Lynn arrived with their playful pup, Lexi. She smiles and wags her tail constantly, such a pretty girl. Joe had his Rottweiler/Pit mix who was also very friendly and as Chris arrived a huge lean dog bounded out from his car. Oh my gosh, this was Cooper. The Cooper that Chris has been skijoring with recently. Wow. What a dog. I didn't realize how large he was. He looked like he was part deer! Awesome.

We chatted a bit and headed out on the trail. It was a beautiful morning, 35F, sun, with a high of 50. Couldn't get any better!

The trail was covered with a lot of snow, some mud and water in the low areas. The shaded areas still held quite a bit of snow.

My climbing legs have been in hibernation, I could feel them resist climbing up the snow covered hills. I was out of breath a few times, but I didn't panic as I did a few weeks earlier. I just took it easy, bringing up the back of the pack. I was OK with that.

I chatted with Cheri and Wayne quite a bit. Cheri is running Bighorn 50K and Wayne is heading out to McNaughton next week. It was fun to catch up, I've been away for so long.

Running through the leaf covered trail was a treat. There were areas where the sun had melted off all of the snow exposing a nice soft cover. It felt good to run on a bit of dirt!

The aid station that I am assigned to next week, AS 2, is covered in an ice berg. AS2 and AS3 will now be combined at the AS3 location.

I had an awesome time, it felt so good to be out running at Zumbro Bottoms among friends again.

I don't know how much snow will be left for the race next week. It rained last night and the forecast is for 50s this week. Much of it will probably melt but I imagine some of it will be left.

I'm planning on running a loop of the course before my 6 PM shift on Friday. Good luck to all of the runners! See you out there!!
Posted by Julie B at 10:27 AM

Yes, it was very encouraging!