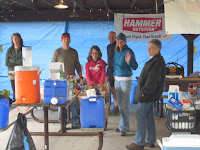 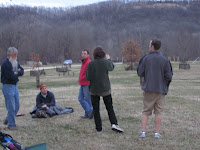 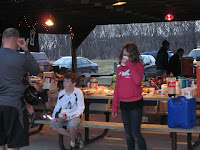 This past Friday was the Zumbro 100 Mile Endurance Run. Originally I was hoping to run this in part with the Upper Midwest Trail Runners Ultra Gnarly Bandit series. Once I was scheduled for surgery I decided I’d volunteer instead.

I had never volunteered during a 100 before so have never worked the night shift. I was sure looking forward to it!

John Storkamp, the new RD for the race, did an excellent job keeping the volunteers updated as to our assignments, our shift times, who we would be working with, etc.

My shift was 6 PM to 6 AM at the Start/Finish. I was happy to be assigned here as I could park my car here and use it as a tent. I would have all of my clothes near me, I could run 25 miles and then change before my shift.

Amazingly the course was in great condition. Just last week there was inches of snow upon the trail. With some rain during the week and temperatures up in the 50s I thought the course would be very muddy. It wasn’t! The snow was gone and the sand had soaked up all of the water. Beautiful!

Completing a long training run during a race is an awesome way to get the miles in! The course was perfectly marked and I was able to pick up Hammergel and Hammer Heed along the way. Visiting with my friends working the other aid stations was quite a treat too. I was surprised that I only ran into Daryl during my loop-he finished in fine form.

The run went very well for me. I was able to climb without gasping for air, I was able to run a few fast miles without my heart rate sky rocketing. I am encouraged for Chippewa 50K in a week and a half.

The course was beautiful. There are long climbs, runnable flats, awesome views of the river from the high bluffs. I saw deer and grouse, wild leeks and purple flowers.

I couldn’t but become excited about running the race next year.

Volunteering the station was so much fun. There were 50 volunteers to 25 runners so we had plenty of help. I filled bottles, packs, made grilled cheese sandwiches, handed out salt tablets, fetched Vaseline, scooped stew and offered encouragement to the runners.

It was interesting to watch the runners come in. The course is a 20. 5 mile loop, completed 5 times so I saw most of the runners twice during my 6 PM to 6 AM shift. Some of the runners were very self sufficient. Many of them had their vehicles parked nearby and just went there to change, mix up fuel, eat. They would run past for me to check in their number and time. Other runners like to know what is available to eat and drink. Then dictate back what they want. Some runners don’t have any idea what they want. I would then suggest at least a gel, how about a ½ sandwich to take along? It was a lot of fun.

Eventually the volunteers began to thin out for a quick nap. John told us to catch an hour or two. I went to my car and reclined the front seat back, cuddling up in a warm down nest. I tried to fall asleep but wasn’t able to . 30 minutes later I wandered back to the station and there was John all by himself. He was exhausted, having been up for days getting this party ready. He nodded off while we were sitting at the fire, then popped back up and began to set up the finish line. He wouldn’t rest for long.

We continued to feed the runners, I would check them in and wrote down their times as they came through. The night was relatively mild. The runners kept their day clothes on. The low was 48F. Not bad!

At one point John looked at me and said "This is really fucked up. These people are out there running 100 miles and we are acting like it's a normal thing for everyone to do. We do it" I responded "Yeah, and Lynn's bone is showing through her knee from her fall and we think it is a great thing that she went out to finish up the race anyway".

The things that you do and that you are around eventually become normal, not fucked up. Amazing.

At the end of the day there were 25 entered and 16 finishers. The course record that John Storkamp set last year was crushed by Adam Schwartz in 21:53.

Here are the results:

It was a fabulous day and I was honored to be a part of the race. Thank you to all of the runners, the volunteers, crew, the RDs. I have a few photos I’ll post later.
Posted by Julie B at 4:05 PM

Thanks for helping out. You really helped keep us rolling all night long!