I just spent an awesome weekend in Hustisford Wisconsin for the Ice Age Trail Races. I have run the Ice Age 50 Miler 4 different times, the last time in 2007, and decided it was time to run upon the trail again. This year the race offered a half marathon, 50K and 50 Mile option. I was in for the 50.

We were a group of four traveling to Hustisford Wisconsin. Bill offered to drive us, we had a ‘cabin’ for the weekend on Lake Sinissippi for free. Our weekend cost was going to be minimal. We were able to fit all of our gear into the back of Bill’s Toyota Prius, I had my cooler between Alicia and I.

Our drive down was fun, joking and telling stories on the way. While Matt and Bill navigated the way to our destination Alicia and I just sat back and enjoyed the ride. We almost stopped to visit an establishment called Cruisin’ Chubbies. We decided against it.

As we approached the cabin we all had our mouths wide open as we took in the view. Our ‘cabin’ was a beautiful home set upon the lake. A sweeping deck around the outside, fireplace, Jacuzzi, drive through garages, it was crazy beautiful. We felt like royalty entering the front door. Wow. 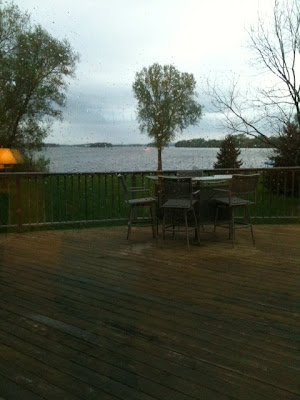 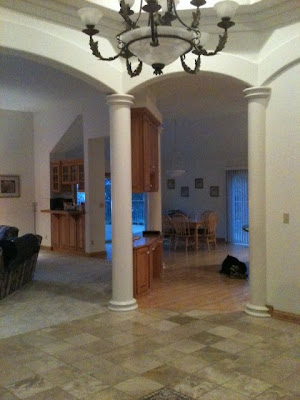 We visited and made preparations for the morning. I retired to my huge bedroom and big bed. Read for an hour and called it a day.

At 340 we woke up to ready ourselves for the day. Matt brought Peet’s coffee along as well as traveler cups so we were super spoiled. A quick breakfast of oats for me and we were off to Ice Age.

We arrived the start by 515, a good 45 minutes before the race start. Plenty of time for collecting number, chip, visiting and photos. About this time I noticed that my GPS wasn’t working. I had charged it on Friday but must have left it on. I like to use it, at minimum, to direct me as to when to take gels. Ugh. Matt had mentioned earlier that he wasn’t going to wear his watch so let me wear his instead. It wasn’t a GPS but did have a running time, I was thankful!

Before the race our RD told us that Tom Bunk was running his 26th in a row and that as a finisher Lorraine would be solo in her age group of 70+. They both finished! I ran with them for a few miles during the race and am just in awe of the two of them.

It rained and the wind was blowing like crazy all night long but amazingly the course was in pretty good shape on Saturday. I have seen it much, much worse. I enjoyed myself so much, running along the trail, saying hello and catching up to others that I haven’t seen in some time.

I drank Hammer Heed from the stations and was able to pick up Hammer gels. I just love that so many races are now sponsored by Hammer Nutrition. I haven’t had to haul along powder in baggies to mix my drink along the trail in quite some time. I always carry Hammergel along just in case, but took them back home with me. I was able to refill on gel at every aid station. I even tried a new flavor: Colorado Mulberry or Huckleberry. It was quite good but not as good as my favorite Espresso. 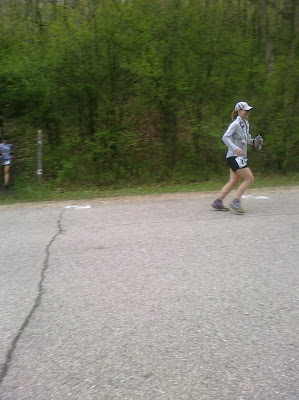 I was feeling good, running along the course at mile 13 when I felt a cramping of some sort. I had never felt it before so thought maybe it was due to nerves, breakfast, or who knows what. I continued to run along and these cramps were starting to come every 5 minutes or so. I stopped to stretch out my core, massaged my lower abs. I noticed that when I walked I didn’t have cramps. By mile 15 I was starting to have some spotting. I hadn’t spotted at all during my hysterectomy recovery, this was very alarming to me. I told myself I’d just run to the next aid station and drop if I was still spotting.

I walked for a while, the cramping and spotting stopped so I began to run along, feeling pretty good. At 20 miles I told Vicky and Wayne what was going on. They reassured me by letting me know they would be at the aid stations for the duration of the day. This really helped me mentally, knowing they would be there. They were crewing for Rick, who was ahead of me, as was Alicia and Matt. I figured I might as well go to the next aid station, 23.

By mile 23 the spotting was heavier and the cramping felt like contractions. What the hell? I wasn’t going to chance this and end up with a big problem. There wasn’t crew access at 23 so I decided at 26 I’d call it a day. A marathon is a good distance to call it a day I told myself. But 50K is better.

Well, eventually the spotting had turned to bleeding and contraction like cramps were causing a lot of pain. I told Vicky and Wayne I was finished because of this. It was the pits. I felt fine otherwise. They let me know that Bill had dropped a while back and was in the car. I collected my drop bag and did the same.

I didn’t feel to bummed about dropping, I was more concerned. Once I was off of my feet and sitting the cramping began to go away. The bleeding was back to spotting. Thank goodness.

We drove to the start/finish, they dropped off Bill and I. We changed into dry warm clothing and headed off to find Alicia and Matt along the course. I really enjoyed watching the runners come through the aid station. I don’t often see this side of the race. We set up at outbound mile 37/inbound mile 43. I watched many of the people that I had been running with come in and run out. Matt was coming back and looked good even though he said he was tired and felt crabby. He looked strong and fast to me. Drank a few mouthfuls of coffee and we told him we’d see him at the finish.

The clock was close to the cut off time. Rick came in only a few minutes after the cut off and Alicia a bit after that. She had been suffering a sick stomach for many miles and continued to stick it out on the trail. Amazing.

We drove back to the finish for Alicia to change and for all of us to eat. We mingled and watched the finishers come in. It was so much fun to cheer and whoop it up for them. Matt came in just after 10 hours, our single finisher in our traveling group. Way to go, Matt!

I was freezing. Even with three shirts, a sweatshirt, two jackets I was still cold. It was raining and blowing. Alicia and I went to wait in the car and just hung out, drinking the Peet’s coffee that Matt brought along 12 hours ago. It was still warm. Yum!

Eventually we headed off to our house of beauty for rest and relaxation. What a nice place. We totally enjoyed ourselves before turning in for the night.

I’m feeling just fine today. No cramping or spotting. I called my surgeon and he told me that this normally takes place when one does too much too soon. He stated that he doesn’t have any other ultra runners as patients, that normally too much is an aggressive walk at 6 weeks. He thought I would have felt these after effects of hysterectomy earlier, during my 1/2 marathon or 50K. He commended me for actually listening to my body and stopping when I did. I’m sure thankful that I did!

He advised me against running Bighorn but stated the Minneapolis Marathon June 5 should be fine.
Posted by Julie B at 7:56 PM

That was such a nice euphemism "tired and crabby". I think I was a lot uglier, but thanks.

I think it is impressive with what you were up against.

Thanks for the happy thoughts

A couple of years ago, Matt and I made some comments about Cruisin Chubbies too. Too bad about the DNF, but it was the right decision. Wish there were photos to compare where you stayed and where I did - two different worlds.

You did the smart thing, that would have scared me, and I am glad you stopped and it's ok now.

Sorry you had to drop out but sounds like you did the right thing! There are always more races.

Pretty amazing that were able to do as much as you did so soon after major surgery - you made the right call.

See you out on the trails soon!

Hey Matt you were not a lot uglier! I just really had a great time, I don't know that I've said that when ending up with a DNF before. Maybe I'm growing up?
Steve,the 'cabin' was amazing!
Yes, Olga, you are right on.
Thanks Robin, exactly, many more races!

Thanks Kel! You are right, I'm glad to have been able to do what I have done!