Coach Ryan at CrossFit Beyond Sport challenged us to run the Rum River 5K. Many of our members hadn't yet run a race, some had run a 10K in the WOD a few weeks ago for the first time, others had only begun to run days prior.  Everyone was up for the challenge!


Ryan volunteered to help out with the race and before he knew it he was setting up, tearing down, registration, timer, oh, and running the race, too!


I ran this one a few years ago with the women I coached in Big Lake. We picked this one out as their first race. I was excited to go back and run.


Troy had a baseball tournament at 1000 so I would be running.. and running off to the game. No time to chit chat afterward and I wouldn't be able to take part in the CrossFit for Hope workout. Maybe next time.


It was a warm morning, so nice to only drive 15 miles to the start!  We took photos, registered and tried to calm nerves. It was so much fun to see so many first timers ready to take their first race steps!!


I wore my watch as I find that when I don't my mind gives me trouble. I am running hard, breathing hard, and thinking I'm not running hard enough? Then I think I am running too hard. It's ridiculous. I began my watch as I crossed the start and paid attention. I didn't want to over run, I was going to run fast (for me) but not so fast that I bonked early.


As I looked down I saw 734 pace. Too fast, back off. Let's aim for 8s. I passed a large group of people and just ran steady. The route was an out and back, so I could see CBS members as they came back. Ryan was out front. As I came back I cheered on the runners that were in back of me. Everyone was giving it all they had.


Across the finish line and there was a PR for me!  The watch paid off, I kept it steady and was able to maintain my pace. I cheered in our runners and then had to head off to the game for Troy.


When I reached the field I saw that Susan had posted to FB a photo of Ryan with my 2nd Place Age Group winner medal!  Sweet!!  I didn't realize I had placed. The age group was 35-49. Cool.


Three of us placed from the gym. Here are some photos and details:


17 Beyond Sport CrossFitters ran the Rum River 5k on Saturday. Not only did we show up in force but as it turns out, CrossFit helps you become better than average at running without doing it all the time! (Despite what Trish might say about us). Our team took home 3 silver medals out of 8 divisions. We were also joined by our friends from CrossFit St. Cloud who turned out several athletes and threw down a workout after the race.
Rob Gutkaes 2nd, Men’s 50+ Division
Julie Berg 2nd, Women’s 35-49 Division
Coach Avery 2nd, Men’s 18-34 Division 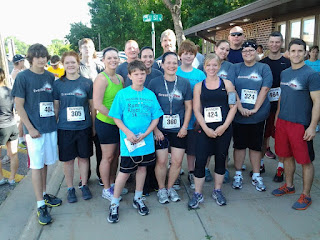