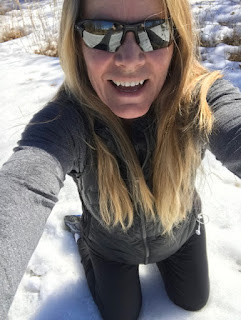 I don't know what it is about running that makes me wax eloquent, makes me feel vibrant and alive, creates great joy inside of me.  I truly don't know that I can pinpoint exactly what it is. It is so many things.

For years I thought those feelings were simply felt because running was something that was SO far off of my radar, that the act of becoming a runner, the act of becoming something that I wasn't, created those feelings. Instead of being hung over, feeling sick, smoking cigarettes.. I was running. I had changed the script. I was able to rise above that shame that I felt.  I thought that the deep change in me created those feelings that running brought to the surface. I no longer believe it is that simple.

After not running for months-which is  longest time for me to abstain from running since I began in 1997-I  believed that I probably wasn't going to be able to run again, I sought other ways to feel joy. I did feel joy through these other situations .. but not THAT joy.   Not that unabashed, all encompassing joy. Deep rooted joy-down into the bone joy.  Other runners know exactly what it is that I'm talking about. While not running I mourned the act, I mourned the feeling that I was no longer a runner but I was able to to put that away and be OK. Just OK. I was able to go on and no longer force recovery, pine away and sulk. I had made peace with no longer running. I had to.  I couldn't be gloom and doom all day.

In February while snowshoe running I stopped and realized what I was doing. I was snow shoe running! Running! I began to bawl. Whole heartedly whole bodily bawl. I fell to my knees and all of this emotion came to the surface. It is what I would envision would happen to me if I saw Topaz running down the trail to me. That. Exactly. I hadn't gone out to snowshoe run. I had gone out to hike upon snowshoes but the body knew what it was doing before the mind. I realized how much I missed running. How much I loved...how can one love an act, a movement, a thing such as running? The act of it, the feel of it, the blood pumping through my body, the heat, the sweat, the smiling, the focus, the not focusing on anything. Just being. Just being ME. After getting home that day I wondered if I dared try it again. Nothing hurt. My neuroma wasn't any worse that it had been. Not better but not worse. My knees didn't hurt. My hips felt fine.  I felt great. I stretched out, practiced yoga, ate many non inflammatory foods and slept well. I was going to make my recovery count. The next day I didn't hurt. I wanted to try it again. I tried it again, snowshoe running increased to an  hour. Nothing but joy.

Over the past few weeks and months  I've moved from snowshoes to treadmill, from treadmill to trail and increased my time and miles running. I'm not in pain. I feel like me. This past weekend I ran a twenty mile long run and it was superb. Everything has changed again. Those months of darkness have led to light. It feels good to dig out my GUs, my hydration pack, to think about daily running routes. Yeah, I've missed it. SO much. I'm letting myself feel it.  I am diligent in my recovery. I am keeping inflammation at bay with a diet rich in inflammatory foods and spices, icing my shins and knees just in case, practicing yoga to keep my tendons, ligaments and facia loose. I am placing recovery in the forefront of my training. Training. Yup, this girlz gotz goalz.

Congratulations on your return! I know the feel of joy running, and nothing else, gives. last week, in Sedona, I couldn't wipe a smile off my face. Running. Single track. Ups - yes, I did - and bombing downs like I used to. I am not planning to increase to no 20 milers any time soon, and possibly ever, but running in itself is all I want. It' too precious to loose for me for a subjective number. 5. 10. And anything in-between. As long as I can feel the air in my hair, and fluidity of my movement, natural sense of it. Enjoy!