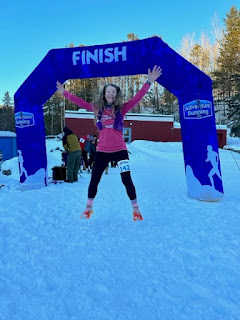 If you remember, last year I took an incorrect turn and didn't make a check in after the first 13 miles. I continued on for another 13 miles but I did not get a finish. I was NOT going to do make the same mistake this year!

Andy emailed the participants that with 11" of new snow we could look forward to a slow soft course and encouraged us to drop down to the half marathon. I wasn't interested in that plan. I wanted a good long run so stuck with the marathon.

With a 930 AM start there was plenty of time for me to drive the 2.5 hours to Duluth, check in and still have time to get dressed in running attire and pack up my hydration vest.

I was surprised that as I drove to Duluth the air temperature kept going up. Normally the opposite takes place. By the time I arrived to the race start it was 23F!  We were going to have a warm day indeed.

Andy checked in with me, letting me know that he added an arrow where I messed up last year. I told him that I did not hold him responsible for my snafoo at all-that was totally on me!  I must say though, when I came up to that arrow I gave it a pat and said thank you Andy!

The snow was soft and deep. There were some deep post holes where hikers and horses had travelled through but most of it was pretty decent. The course is just so beautiful. I enjoy the woods, the paths along the river, the hills. It really is stunning. Not many people enter the race, it is low key and you aren't coddled.  All plusses in my book. 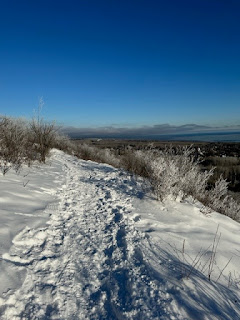 I found myself running with Kate for almost the full first loop. The time went by too quickly!  Before I knew it we were running into the start/finish. I filled up my hydration vest which I had been wearing under my jacket to keep from freezing. As the volunteer filled it we noticed that I had completely drained it. I didn't realize that I had consumed 60 oz of tailwind during that 3 hours. It went down easy!

I zipped back up and headed out for loop two. I picked up the pace as the course was a bit more packed down now with everyone having gone through once. It was foggy on the lookouts over the city/lake during the first lap but during the second lap the fog burned off, the sun came out and the views were fantastic!

I hadn't run a longer distance since Superior in September so it was good to learn that my hamstrings had healed, my legs were strong and I was back where I love to be. Effortless. I could run all day at this pace.

Most of the second lap I ran solo. I'd come up on a person every once in a while but not very often. It was quiet, peaceful and meditative.

Running into the finish with a negative split, first in my age group and oldest finisher was a cherry on top of beautiful day spent running.